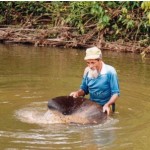 Three people have died and more than 30 have been injured in clashes between miners and police in Peru.

The miners are protesting against tougher penalties for illegal mining.

Local officials said police were far outnumbered by the protesters, who are trying to take control of the airport at the city of Puerto Maldonado.

The miners say the new rules will put them out of work, but the government says the sanctions will encourage miners to get the necessary permits.

An estimated 50,000 miners do not have a licence to operate.

The government says large areas of jungle have been destroyed by illegal mining and large portions of the area’s waterways show high levels of mercury, used in the mining operations.

Officials say they want the miners to obtain the correct permits and to abide by environmental rules, but the protesters accuse the government of wanting to hand over mining concessions only to large multinational companies.

The latest protests erupted after talks between the government and the miners broke down on Tuesday.

Regional President Luis Aguirre described the situation as “untenable”. “You can hear gunshots throughout the entire city,” he said.

Police have asked for reinforcements as 700 officers were outnumbered by more than 10,000 protesters.

Informal miners also held protests in two other regions, in Piura in Peru’s northwest and in Puno in the southern highlands bordering Bolivia.

Peru is one of the world’s major gold producers and high prices have sparked a boom in recent years.

The government has urged the miners to return to the negotiating table for more talks scheduled for Friday, but it is not clear so far if the miners will attend.

Insiders Point of View on This Story

This story is a bit shocking, especially as 3 people were reported dead from violent protest. It is also a blow to Peruvian tourism that has seen year on year increase for the last 10 years. Fortunately, incidents of this nature don’t happen very often, and it is important to know why these protests are happening, before re-considering any travel plans that you have or might be making.

The region of Madre de Dios is located in the far south-eastern corner of Peru, and is entirely covered by dense Amazon Jungle. It is one of the biggest regions within Peru, but is also one of the least populated with approximately 100,000 residents. Tourism, Cotton, coffee, Brazil nuts, and palm oils are the main source of income, with many people also making a living sifting gold from the mineral rich rivers. The reality is however – is that the region is relatively poor, and the people struggle to earn an income.

The new government laws that plan to ban gold mining will affect the lives of many thousands of people in the region, and this has angered locals. Protests in Peru are quite common, and anger against government proposals to new laws and changes of policy anger are frequent.

Illegal mining has had a major impact on conservation in the region, and on-going mining is causing pollution to the rivers and wildlife alike. The people and the government need to find a solution to the problem, but I fear that this is a solution that is a long time coming, if at all.

If you are travelling to Peru in the next few months, or have a Peru tour planned, it is important to realise that this will not affect the majority of tourists, and this is only localized protesting in the Jungle town of Puerto Maldonado. Cusco, Machu Picchu, Lake Titicaca, Nazca, Lima are not affected and travellers to these destinations need not worry. If you are travelling to either Tambopata National park or Manu Bio-sphere reserve, then it is probably best to check with your travel agent the latest news on this situation before you travel.