Birds of the Amazon

Nowhere in the world is there such a plethora of birdlife as in the Amazon rainforest. The Manu Biosphere Reserve alone is home to over 1,000 different species. Their names are often as exotic as their appearance: from golden-headed quetzals to yellow-rumped caciques to pale-winged trumpeters, they represent a birdwatcher’s dream. Who wouldn’t think their trip worthwhile if they spotted a paradise tanager, known as the siete colores because of its seven colored plumage? Or a jabirú stork, one of the largest flying birds in the Americas, up to 1.4 meters (4 ft) in length?

Many species fly in mixed flocks: insectivorous birds, such as woodcreepers and ant-birds, will flock together, sometimes as many as 100 of them traveling in a great cloud. This makes individuals difficult to distinguish on first sighting, but they tend to stick to the same feeding areas so, if you identify their territory, you will have a great opportunity to spot a variety of species together. The same applies to the mixed flocks of fruit eaters, which include tanagers, fruit crows and parrots. Once you identify a food source you have an excellent chance of seeing a large number of birds. Not that rainforest birds are always easy for the uninflected to spot, which is why an experienced guide is invaluable, and one usually accompanies visitors on organized tours. The oxbow lakes of the Amazon are the habitat of herons, hoatzins, egrets and wattled jacanas, species not difficult to spot as the forage on the shores. Raptors flying high above the canopy, can present more of a problem, but the harpy eagle, among other majestic creatures, can be spotted from vantage points at clearings or on river-banks. 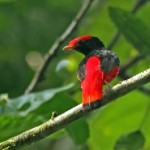 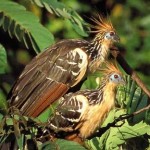 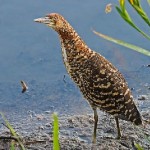 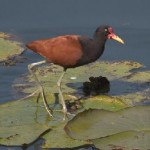 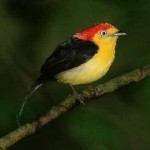 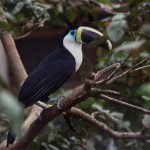 These can manage only short, clumsy flights. They form mating groups, and share the rearing of their offspring. The young have clawed wing bends, to help them clamber about in trees.

A solitary and elusive bird, the cotinga belongs to the same family as the cock-of-the-rock and the fruit crow. It feeds on fruit and insects, which it finds in the treetops.

Refrecent Tiger Heron
These elegant, reddish-colored birds are frequently spotted in and around the lakes and streams of Manu Biosphere Reserve. They can also be spotted flying over clearings.

Wire Tailed-Manakin
This manakin has a long filament in the tail which the male uses to strike his partner during the courtship ritual.

Wattled Jacana
Foraging at the edge of an oxbow lake in Manu Biosphere Reserve, the wattled jacana is unusual in that the female takes more than one mate, lays several clutches eggs and leaves the males to rear the young.

Stamping Out the Bird Trade

One of the most spectacular sights in the Peruvian Amazon is that of macaws gathered at the huge salt licks in the Tambopata National Reserve. But some people still regard exotic birds as interesting pets, and the macaws and parrots that inhabit the same pan of the rainforest can be trapped, exported and sold on the international market. Although the Convention on Trade in Endangered Species (CITES), signed in Washington in 1972, protects the species that are most under threat, it is not strictly adhered to, and doesn’t affect birds whose numbers are high. The influx of tourists has helped to create an alternative source of revenue, making the trade less economically attractive to local trappers.

This site has been put together by travel professionals living and working in Peru, and is full of destination ideas, things to do, places to stay and restaurant reviews! Take some time to read through our Peru Travel Guide for other ideas, and contact us should you have any questions.