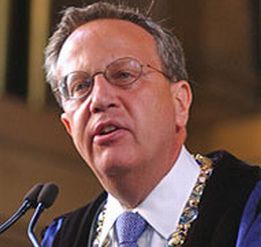 Levin clarified that a “framework” for an agreement with Peru has been reached. (Photo: Yale.edu)

Yale’s University president, Richard C. Levin, clarified that a full agreement with Peru’s government was not in place, but only the “framework” of one, reported the Yale Daily News Saturday.

Levin’s comments came after Peruvian president, Alan García, announced Friday that Yale had agreed to return more than 4,000 Inca artifacts to Peru, discovered and taken to the United States by Hiram Bingham more than 90 years ago.

The Harvard president said he was “quite pleased” that Yale and Peru had been able to reach the “framework” of an agreement regarding the artifacts.

“But the details are still being finalized over the weekend,” he added.

Levin declined to comment on how long some of the artifacts will remain in New Haven, but he said that all of the relics will ultimately be returned to Peru.

He said the time frame for their return is still being finalized. Levin’s remarks contrast with García’s announcement that all Inca artifacts should be returned in early 2011.


A delegation from Yale consisting of director of the Yale Center for the Study of Globalization, former President of Mexico Ernesto Zedillo, director of the Peabody Museum, Derek Briggs, and professor of anthropology Richard Burger met with Peru’s president, Alan García.

In the past, Yale representatives have never dealt with such high-ranking members of the Peruvian government, Levin said.

Peru sued Yale in December 2008 for the artifacts’ return. Levin declined to comment on how the new agreement will affect the status of the lawsuit.

The artifacts are currently at the Peabody Museum in New Haven, Connecticut.

ENTERTAINMENT TIP: If looking for fun at night, or to watch sports during the day, or even a taste of home, visit the Wild Rover Hostels for great food, sports and beer! Entrance to their bars is free even for non-guests
DISCOVER PERU LIKE A LOCAL ONLY WITH PERU HOP