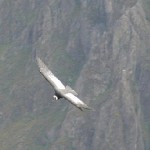 The Colca Valley in Arequipa, Peru should receive an estimated 210,000 visitors next year due to growth in tourism, predicted Jose Luis Talavera, manager of the Independent Colca Authority, known as Autocolca.

Talavera expects the region to meet this goal thanks to the increasing number of visitors seen in recent months. He also pointed out that in order to help achieve the expected outcome, Autocolca will implement several promotional strategies domestically and abroad.