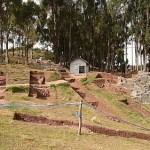 New findings at the archaeological site of Saqsayhuamán

An Inca plate, a burial site and part of an Inca road have been found recently at the Sacsayhuamán archaeological site, overlooking Cusco, reported the Region Office of Culture.

One of the most visited tourist attractions in Cusco, Sacsayhuaman seems to never stop surprising archaeologists.

This time an Inca plate, as well as ceramic and bone fragments were found in trench n° 45, at the zone known as Q’enqo-Patallaqta.

Likewise at trench n° 51, a funerary burial was found with ceramic fragments, and at trench n° 59 ceremonial objects such as an urpu and an aríbalos (or amphora): characteristic shape Inca pottery.

In the surroundings, archaeologists also found the continuation of the Qhapaq Ñan, the prehispanic road that lead to the Antisuyo region, according to the Incas.