A short hike up the hill from the North end of Cusco one finds what is perhaps the most under-promoted ancient site in Peru.  It is justly called the New World Stonehenge, but its stones are larger and more finely cut and fitted. It is called Sacsahuaman, but the tour guides call it sexy woman, a name sure to stick in the tourist’s mind.

It is fashionable these days to refer to Sacsahuaman as a temple. Nevertheless, for a number of reasons, I think it was primarily a fortress.

Sacsahuaman runs about 400 meters in length, stretching from the banks of the Sapi River on one side to the Tullumayo River on the other.  These rivers form a triangle that meet at the southern end of Cusco, so with two rivers and the massive fortress of Sacsahuaman, Cusco was relatively secure from marauding neighbor tribes. There are three tiers of walls rising from the plain. They are in a zig zag shape which if perfect for a fortress as an enemy, attacking anywhere along the wall will have its flank exposed.  At the top of the hill are the remains of several towers. Two rectangular towers were thought to house grain and troops.  A third, a cylindrical one, was apparently a water tower. It is believed that water was brought from a great distance, running through underground stone pipes. If this is the case, the people who built Sacsahuaman knew the siphon principal, for the water followed an underground course that was at places, much lower than the tower itself. 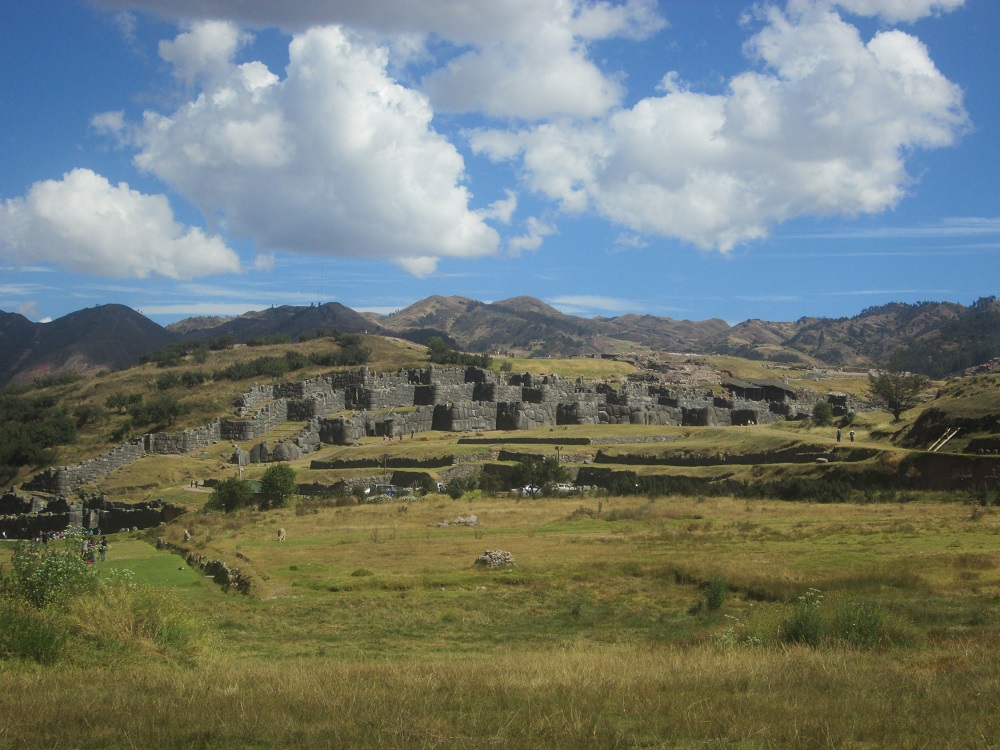 The Zig Zag Walls of Sacsayhuman

Legends tell of an underground tunnel that runs from Sacsahuaman down to the temple of koricancha (rebuilt and renamed Santo Domingo by the Spanish). The story has it that children kept getting lost in the tunnel and it was therefore sealed to prevent such accidents. The veracity of this story is still unproven.

The stones of Sacsahuaman are massive…more massive than stones at any other construction site in the New World.  One is estimated to weigh between two hundred and three hundred tons.  This would make these the largest stones anywhere in the New World and perhaps only bettered by the stones of the Baalbek Temple in Lebanon.

Many of these massive stones were brought from the quarry at Rumicolca, about 20 miles distant from Sacsahuaman. Traditional thought has it that they were dragged by ropes using logs as rollers, but nobody really knows for sure.  And certainly nobody knows for sure how they were fit together so perfectly in random shapes that a blade of grass or paper cannot fit between the joints. It is believed that the stones were formed by pounding them with river rocks.  This however doesn’t explain the perfect inside corners prevalent at Sacsahuaman and other Andean sites.

Various attempts have been made by such as the Discovery Channel to duplicate on a small scale what was done at Sacsahuaman, but no one has come close. Perhaps they just didn’t have enough time and labor. Or perhaps the ancient builders had a technology long lost to us. Kurt Vonnegut’s tongue in cheek quip is about as good an explanation as any: “There must have been days of light gravity in olden times, for people to throw those huge stones around like tiddley winks.”

In fact, a scant 30 years after Sacsahuaman was built, its provenance and construction was a mystery. 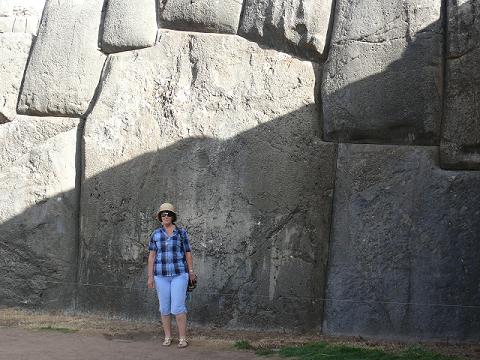 200 – 300 Ton Stones at Sacsayhuman, You Couldn’t Get a Piece of Paper Between Them

The chronicler Garcilaso de la Vega was born around 1530, the son of a conquistador and an Inca princess, and was raised in the shadow of these walls. And yet he seems not to have had a clue as to how Sacsahuaman was built. He wrote: “This fortress surpasses the constructions known as the Seven Wonders of the World. For in the case of a long broad wall like that of Babylon, or the colossus of Rhodes, or he pyramids of Egypt or other monuments, one can see clearly how, by summoning an immense body of workers and accumulating more and more material day by day and year by year they overcame all difficulties by employing human effort over a long period. But it is indeed beyond the power of imagination to understand how these Indians, unacquainted with devices, engines and implements  could have cut, dressed, raised and lowered great rocks, more like lumps of hills than building stones, and set them so exactly in their places. For this reason and because the Indians were so familiar with demons, the work is attributed to enchantment.”

Surely a few of those 20,000 laborers were still around when Garcilaso was young.  Was everyone struck with amnesia?  Or is Sacsahuaman much older than we’ve been led to believe.

No one should visit Cusco without a lot of time exploring Sacsahuaman.  The visitor should climb to the top for a good perspective of this mighty ruin, and should also cross the field that fronts the fortress and explore the labyrinth of carvings, shrines and tunnels found beyond the big granite outcropping known as Rodadero Hill.

How to Hike from Cusco to Sacsahuaman

From the center of Historic Cusco it is possible to hike to Sacsahuaman in 30 – 40 minutes. Leaving from Cusco’s main Plaza de Armas by Calle Suecia (near McDonalds!), follow the narrow road to the very top where it meets with Calle Don Bosco. Turn right and continue up the winding road for another 10 – 15 minutes until you reach a sharp u-bend in the road. On the bend is the entrance gate to Sacsahuaman, here you will need to show (or buy) your BTG Cusco Tourist Ticket. Continuing up a small ravine for a further 10 minutes you will finally arrive at the archeological site of Sacsahuaman. 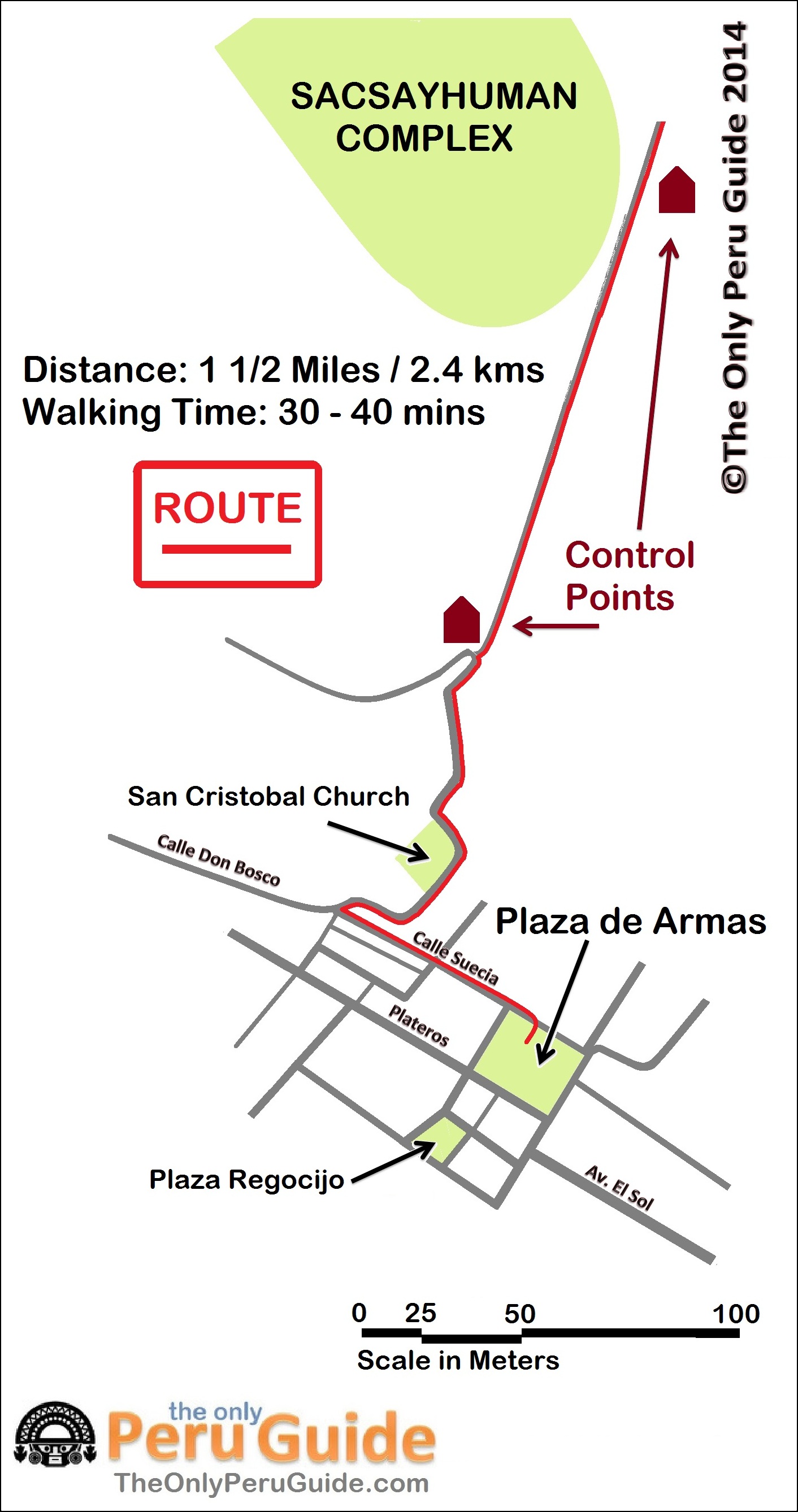