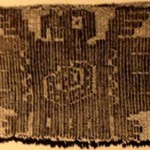 One of the earliest groups in Peru to be studied were the Huaca Prieta people, who lived at the site of that name around 3500 BC to 2300 BC. These hunter and gatherers began simple agriculture, growing cotton and varieties of bean and pepper, but corn, now a national staple, was unheard of. Finds of simple nets and hooks indicate that they primarily ate seafood. Homes were single-room shacks half buried in the ground, and most of what is known about these folks has been deduced from their middens, or garbage piles. It seems that they were a Stone Age people who didn’t use jewelry, but had developed netting and weaving. At their most artistic, they decorated dried gourds with simple carvings; similarly decorated gourds are produced today as a Peruvian handicraft. Hot stones may have been dropped into these gourds to cook food. 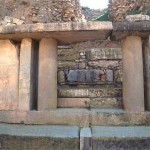 About 850 BC, a major new cultural influence that of the Chavin, began to leave its mark on the area. This period was named after the Andean site of Chavin de Huantar, where a feline worshipping cult had it´s main center. The Chavin influence swept over the northern mountains and the northern and central coasts of Peru. At its most simple, the Chavin influence consisted of a highly stylized art form based especially on jaguar motifs. This was the first major culture in Peru, as well as one of the most artistically developed. The various areas and groups it encompassed were typified by the rapid development of ceramic ware and a common art form. In the Trujillo area, the Chavin influence was represented by the Cupisnique culture. Examples of Cupisnique pottery can be seen in the museums of Lima and Trujillo, though there are no especially noteworthy ruins from the Cupisnique culture open to visitors.

In the Trujillo area archaeologists have identified other geographically smaller and less -important cultures that followed the Cupisnique period. These include the Salinar, Vicus and Gallinazo. 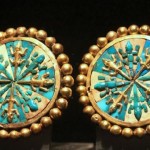 With the decline of the Cupisnique period came the beginnings of the fascinating Moche period, which is defined by the Moche cultures impressive archaeological sites and some of the most outstanding pottery to be seen in Peru’s museums.

The Moche culture is named after the river that flows into the ocean just south of Trujillo. The word ‘Mochica’ has been used interchangeably with Moche and refers so a dialect spoken in the Trujillo area at the time of the Spanish conquest, though not necessarily spoken by the Moche people. Moche is now the preferred usage.

The Moche culture evolved from around 200 BC so AD 850. The Moche didn’t conquer the Cupisnique; rather, there was a slow transition characterized by a number of developments. Ceramics, textiles and metalwork improved greatly under the Moche, architectural skills allowed the construction of huge pyramids and other structures, and there was enough leisure time for art and a highly organized religion.

As with the Nazca culture, which developed on the south coast at about the same time, the Moche period is especially known for its ceramics, which are considered the most artistically sensitive and technically developed of any found in Peru. The thousands of Moche post preserved in museums are realistically decorated with figures and scenes that give us a very descriptive look at life during the Moche period. As there was no written language, most of what we know about the Moche comes from this wealth of pottery. Pots were modeled in to life like representations of people, crops, wild animals, marine life and monumental architecture. Other pots were panted with scenes of both ceremonial activities and everyday objects. From these pots, archaeologists have deduced that Moche society was very class conscious. The most important people, especially the priests and warriors, were members of the urban classes and lived closest lo the large ceremonial pyramids and other temples. They were surrounded by a middle class of artisans and then, in descending order, farmers and fishers, servants, prisoners and beggars.

Moche ceramics usually depicted priests and warriors being carried in litters wearing particularly fine jewelry or clothing. Further evidence of the authority of priests and warriors is given by pots showing scenes of punishments, including the mutilation and death of those who dared to disobey. Other facets of Moche life illustrated on the pots include surgical procedures, such as amputation and the seting of broken limbs. Sex is realistically shown; one room in Museo Larco in Lima; is entirely devoted to erotic pots (mainly Moche) depicting most sexual practices, some rather imaginative. Museo Cassinelli in Trujillo also has a fine collection. Clothing, musical instruments, tools and jewelry are all frequent subjects for ceramics.

The ceramics alto show us that the Moche had well-developed weaving techniques. But rare rainstorms, which occurred every few decades, destroyed most of their textiles. Their metalwork, on the other hand, has survived. The Moche used gold, silver and copper mainly for ornaments, but some heavy copper implements have also been found.

Two main Moche sites have survived, side by side, a few kilometers south of Trujillo and are easily visited. They are the Huacas del Sol y de la Luna.

The Moche period declined around AD 700, and the next few centuries are somewhat confusing. The Wari culture, based in the Ayacucho area of she central Peruvian Andes, began to expand, and it´s influence was felt as far north as the Chicama valley. 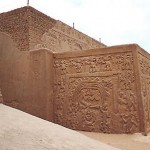 The next important period in the Trujillo area, the Chimu, lasted from about AD 850 to 1470. The Chimu built a huge capital at Chan Chan, just north of Trujillo. The Chimu was a highly organized society – it must have been so have built and supported a city such as Chan Chan. It´s art work was less exciting than that of the Moche, tending more to functional mass production than artistic achievement. Gone, for the most part, was the technique of panting pots. Instead, they were fired by a simpler method than that used by the Moche, producing the typical black ware seen in many Chimu pottery collections. Despise it´s poorer quality, this pottery still shows us life in the Chimu kingdom. But, while the quality of the ceramics declined, metallurgy developed, and various alloys (including bronze) were worked. The Chimu were also exceptionally fine goldsmiths.

It is an urban society that the Chimu are best remembered. Their huge capital contained about 10,000 dwellings of varying quality and importance. Buildings were decorated with friezes, the designs molded in mud walls, and important areas were layered with precious metals. There were storage bins for food and other products from across the empire, which stretched along she coast from Chancay to the Gulf of Guayaquil (southern Ecuador). There were huge walk-in wells, canals, workshops and temples. The royal dead were buried in mounds with a wealth of offerings.

The Chimu were conquered by the Incas in 1471, but the city was not looted until the arrival of the Spanish. Heavy rainfall has severely damaged the mud moldings, though a few survived, and others have been restored.