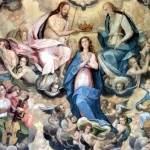 Coronation of the Virgin – Bernando Bitti

The Cusqueña Art movement, which worked mainly in oils and blendes indigenous and Spanish iconography, was limited to the Cusco region in the sixteenth century, but during the seventeenth century it spread to Titicaca and Bolivia, after which much of its technique was developed and elaborated. By the eighteenth century the style had been disseminated as far afield as Quito in Ecuador, Santiago  in Chile, and even into  Argentina, making it a  truly South American art form and one of  the most  distinctive indigenous to  the Americas.

The most  famous Cusqueña artists were Bernando Bitti (sixteenth century), Diego Quispe  Tito Inca (seventeenth century)an artist of mixed blood who  was influenced by  the Spanish  Flamenco school- and whose paintings were vital tools of communication used by  priest attempting to convert Indians to  Catholicism – an Mauricio Garcia ( eighteenth century), who helped to move the form into a fuller mestizo synthesis, mixing Spanish and Indian artistic forms. Many of the eighteenth- and nineteenth- century Cusqueña – Mestizo works display bold composition and use of colour. The Cusqueña school is best  known for portraits or  religious scenes, with dark backgrounds, serious- looking, even tortured characters and plenty of gold-leaf decoration.