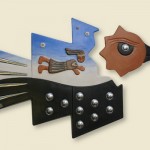 Born in coastal Piura, Pablo Seminario has been fascinated by ancient Peruvian pottery since his childhood encounters with huaqueros selling looted ceramics to the highest bidder. After  earning  a degree in architecture  in Lima, Seminario  moved to  Cusco  in  1979, but soon found his architectural work overshadowed by  his desire to  study  and re- create of the  pottery  of Pre- Columbian peoples using ancient techniques. Seminario met Marilú Behar, a textile artist, and together they moved to Urubamba, where they open a small ceramics workshop. Natural clays nearby provided Seminario with the same material used by  Inca potters.

Developed over three decades, Seminario-Style pottery is instantly recognizable and ranges from utilitarian to decorative, jewelry to totems, and vases to wall  plaques. Begun as a small family affair, The Seminario Ceramic Studio (Berriozabal 405, Urubamba, tel 084/201002, www.ceramicssemainario.com) has now moved to larger grounds and is an important source of income for local artisans. The studio and sales gallery open daily, and Pablo or Marilú often talk to visitors. A guide will lead you through the attractive grounds, which include local plants and camelid enclosure.