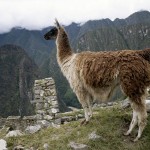 Domesticated in  the Lake Titicaca region  more than 6,000 years  ago, the  llama (llama glama), at 250 to  400 pounds(114-182 kgs) and  up to 6  feet (2m) tall, was the largest domesticated animal  on the  continent until the Spaniards arrived with their  horses and  cattle. Historically used for the transportation of goods, llamas still work as baggage animals today, carrying as much as 50 pounds (22.5 kg). To the amazement of the Inca, early Europeans attempted to ride these diminutive beasts. The llamas, distressed by  the extra  weight upon them, would  twist their  neck and  spit  at  the  riders, leading to  to  popular myth that  llamas generally spit  at  people. In fact, llamas are more likely to spit at rivals during mating season than at humans.

The indigenous people of Peru, who regularly ate the llama’s tought meat, used the animal’s coarse fur for ropes or rough yam and its dried dung as fuel. A vital part of everyday life, llamas were sacrificed to Inti, the Inca sun god, and to other gods by pre –Incan cultures. 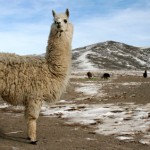 Domesticated soon after the llama, alpacas (lama  pacos) were raised for  their  fine wool. Softer  than most sheep wool, alpaca fleece is  sought- after  the  world  over,  and alpaca farms have sprung up in North America, Europe and Australia, About  80  porcent of the  world  estimated four  millions alpacas live in the highlands of  southern Peru, where they  form a major  part of the  economy of highland campesinos ( peasants). Formerly eaten only by poor campesinos, alpaca meat– high in protein, low in fat and cholesterol – has recently earned a place in the fashionable Novoandina (new Andean) cuisine. 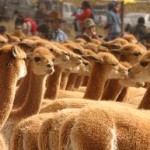 Peru s smallest camelid, the delicate and skittish vicuña( Vicugna vicugna), has the finest wool in the world, and its golden coat and white belly make it the prettiest of the four species. Its  wool is sheared during chaccus (ceremonial roundups) in late May or June, after which the animals are released back  in to the wild. In Inca times, only nobles wore the luxurious wool. After the Spanish conquest, however, the wool was more widely used and their numbers dwindled.

By the mid- 20th century, the vicuña was in danger of extinction. As a result, reserves such as Pampas Galeras above Nasca and Salinas y Aguada Blanca near  Arequipa established conservation programs. By 1995, the number of vicuñas had recovered sufficiently to permit shearing once again, which in turn aided the growth of local economies profiting from the sale of the wool. Today there are more than 100,000 vicuñas in Peru.

For more information and interesting articles about Peru, please take some time to look through our Peru guide.