Where did the name Peru come from? The name was never a word used by natives or by the Inca. So where did it originate? Who gave the country its name and why. The chronicles of Garcilaso de la Vega shed light on the origins of the name Peru; and the story is quite a funny one too!

If you’re not up-to-date with your history of South America (which I am sure many of you aren’t), you have probably never heard of Garcilaso de la Vega. Born to the son of a Spanish conquistador and Inca princess, Garcilaso de la Vega (1539 – 1616) was a hugely important figure in capturing and recording the history of Peru. He was one of the first Spaniards to write detailed accounts of the Incas and the Spanish conquest of Peru which occurred not too long before his birth. The Royal Commentaries of the Inca’s (Comentarios Reales de los Incas – in Spanish) was published in 1609, a few years before he died, and was based on his own accounts of the history as well as accounts of his ancestors. In these chronicles he explains one theory about the origins of the name Peru.

How the country came to be known as Peru

Vasco Núñez de Balboa discovered the South Sea on 1513, and was the first Spaniard to ever see it. He was given the title of “Adelanto of the Sea,” with the power to conquest and govern any of the kingdoms that he might find. He built several expedition ships to navigate the South Sea, one of which sailed passed the equatorial line along the coast of what is now the continent of South America. At the mouth of an estuary, the Spanish spotted a native Indian quietly fishing. Sending to shore four of their best swimmers, the Spanish ship sailed closer to the coast to surprise the unsuspecting native. As the native stood looking out to sea in bewilderment at the strange floating object, he was quickly pounced upon, captured and hauled aboard the boat. After calming him down by “stroking him,” the Spanish set about asking him a series of questions about the unknown land. Using “sign language and gestures,” the Spanish asked him what the land was called. Scared and confused and wanting to appease his captors, the native blurted out the word “Berú,” which was actually his name. He blurted out a second word “Pelú,” meaning river. The Spanish somehow managed to combine the two words to create what we know the country to be called today – Perú. 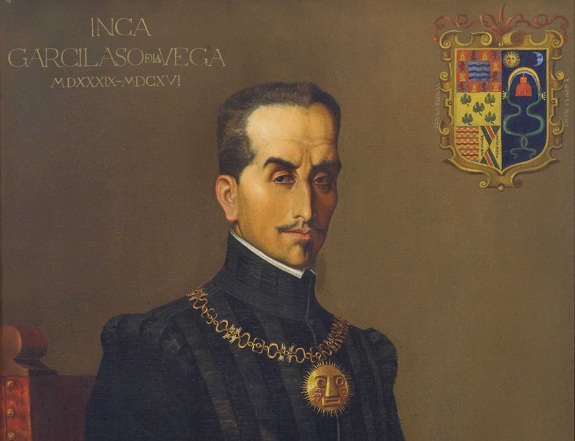 The comical facts about the name

As Garcilaso de la Vega comments in The Royal Commentaries of the Inca’s, the name Peru was still not used by natives some 70 years after the conquest of the empire. Although the name Peru was synonymous around the world as a place full of incredible riches, Peru was a word simply not known by the natives. The Incas and natives knew it as Ttahuatin-Suyu, meaning the four-quarters of the world. The name Berú on which the Spanish decisively named the country, was a native name only known in the coastal area of the country and not known or used by those living in the highlands. Garcilaso de la Vega finishes his summary of the origins of the name Peru, by stating that in fact many of the names given to places in the America’s where actually fumbles or misunderstandings between the Spanish and natives. He says that the Spanish believed that the natives replied correctly to their questioning, as if they had been speaking the same language for years.

The accuracy of the Spanish chronicles

The Spanish weren’t well renowned for their delicate approach to conquering countries; and in the case of Peru, it wasn’t any different. Pillaging and plundering the country of all its riches (gold and silver), the Spanish conquistadores where ruthless in their approach to taking control of the Inca Empire. Therefore, it is not surprising that many modern day historians take the chronicles of Garcilaso de la Vega with a small pinch of salt. Some of what he wrote was contradictory to that of what was written by other chroniclers around the same time, casting a shadow of doubt on the accuracy of the chronicles. After all, would the Spanish really write a true account of exactly what they got up to in a foreign land away from the eyes of the Spanish royalty? It could be said that his accounts of the origins of the name Peru where also inaccurate, perhaps just a good story or myth.