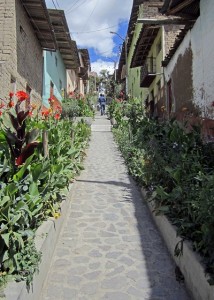 Otuzco is two hours of slow and careful driving from Trujillo, in northern Peru. The driving needs to be careful as the road winds its way into the highlands, from sea level up to over 2600 metres, through steep-sided river gorges and dramatic mountain scenery.

Leaving Trujillo mid morning, we passed mile after mile of sugarcane fields and trucks overloaded with harvested cane awaiting delivery to a cane factory – this one only processes raw cane into sugar, whereas others process it into rum and the cane fibres into a coarse paper. We also saw a cane-cutting machine – the locals call them air scorpions, and I can see the resemblance. Such machines are not so common and most cane is cut by hand. The cane the scorpion was cutting was still smouldering from having been burnt earlier that day.

As we climbed higher and the landscape changed, so did the crops. In the highlands, the main crop is pineapple and we passed many plantations and roadside stalls selling these. Other crops include oranges, guavas and various other fruit, as well as corn, lettuces, cauliflower, beans, artichokes and asparagus, a big export crop from this region. 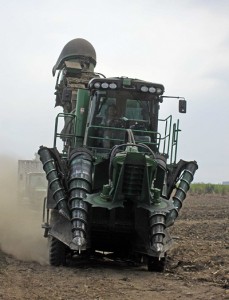 The rugged mountains also contain gold. We passed a fork in the road, where the other, dirt, road led to a large gold mine further up in the mountains, and two armoured cars carrying the proceeds from the mine to the city.

At first, the skies were overcast and grey, with very low cloud shrouding the hill tops but this cleared as we drove higher and, despite having been warned that it would be much colder in Otuzco, it was actually fine and warmer there.

Otuzco is a town of around 25,000 people, and the centre for the highland area in which it sits. However, its main claim to fame is its patron saint, the Virgen de la Puerta (Virgin of the Door) and people come from all over Peru to present her with offerings in the hope of getting favours in return. The cult of the Virgin began in 1674 when a statue of Our Lady of the Conception reputedly helped to defend the town against the threat of pirates.

ENTERTAINMENT TIP: If looking for fun at night, or to watch sports during the day, or even a taste of home, visit the Wild Rover Hostels Cusco for great food, sports and beer! Entrance to their bars is free even for non-guests
View More 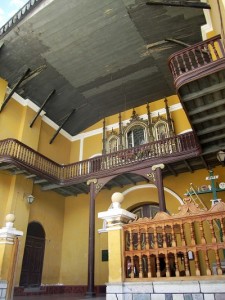 The festival of the Virgin, celebrated during the second week in December, attracts thousands of devotees from throughout South America, some of whom walk the 73 kilometres from Trujillo to prove their faith. The original church of the Virgin proved too small to cater to such crowds, so it is now a museum, providing a fascinating insight into the cult of the Virgin. It houses thousands of dollars worth of offerings, including row upon row of glass cabinets that contain the Virgin’s sumptuously embroidered robes. There were three glass cases of small shoes, offered by the shoemakers of Trujillo; several cabinets of gold and silver jewellery of all types and sizes; even a case full of human hair, grown long then cut off and offered as a personal treasure to the Virgin.

Apparently, you can offer small items and money simply by depositing them in the voluminous blue barrels in the back of the new church but if you want to donate something more significant like a robe for the Virgin to wear, you must initially write to the church authorities, who write back approving and scheduling your gift. The capes are such popular offerings that they are allocated far into the future and a current donation may not be worn until, perhaps, 2025. 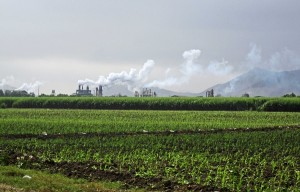 The new church, adjacent to the old, is a solid, grey concrete monstrosity – ugly in its utilitarianism. The faithful were having their photos taken in front of the altar and the various saints who occupy the walls. We went upstairs to see the smaller version of the Virgin, who sits on an outside balcony – the main, larger statue can only be viewed by appointment and, we were told, a sizeable donation.

Next, we walked up one of the steep-sided streets leading off the plaza and up the hill beyond – a pedestrian street, with beds of flowers bordering the central walkway, little religious statues at various points on the way up, and a large cross at the top. For believers, the climb is another part of the Otuzco religious experience. The view from the top was certainly photographable, as were the views from the surrounding streets which we also explored. 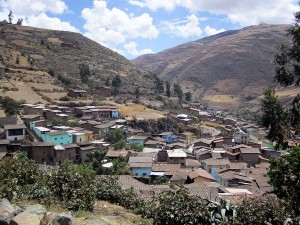 My outing to Otuzco was a welcome change from the other sights I saw in northern Peru. It offered a refreshing change of scenery, a fascinating glimpse into rural life and some insight into the part religion plays in the everyday lives of so many Peruvians.