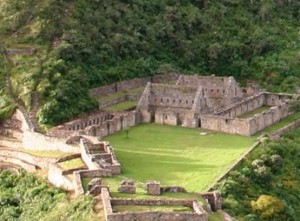 Since the demise of the Incan Empire, rumours, clues and tales of a fabled lost Incan city full of gold and silver have rippled across Peru. The tales prompted searches, discoveries and often re-evaluations. Machu Picchu wasn’t the lost city that Hiram Bingham thought it was Vilcabamba the old last refuge of the Incas.

The search continues though and incredibly, new discovers continue to occur. First it was Choquequirao in the 1990s. More recently other exploring teams have announced discoveries of other lost Incan cities.

Discovery of Qorihuayrachina (also known as Cerro Victoria) 35Km (22 miles) southwest of Machu Picchu, was announced by the National Geographic Society in March 2002. The ruins are large and cover 6 sq.km (2.5 sq. miles) and occupy a spectacular mountain top location with panoramic views of the Vilcabamba range’s snow capped peaks, which were considered sacred by the Incas. Archaeologists claim that Qorihuayrachina is one of the most important discoveries of the Inca Empire, and slowly more information is be learnt about the lives of the Incas which lived there.

Just months after the discovery of Qorihuayrachina, another team of explorers from The British Royal Geographic Society, announced the finding of a major new Incan site, which was named Cota Coca, a few kilometres from Choquequirao, but across a deep canyon. Wholly unknown to the outside world, Cota Coca was a some sort of administrative and storage centre.

It is unknown how long discoveries will continue, as the physical geography of the south-eastern Peru is extremely wild, and demanding to explore. Thick and dense Amazon Jungle make it particularly difficult to locate any potential ruins from both the ground and from aircraft above. This region of Peru was the centre of the Incan Empire, and with further explorations it is sure that the Vilcabama Jungle still holds many more hidden and lost secrets.