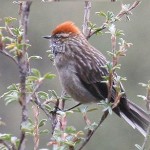 Often areas rich in endemic birds are often close to historical centers of culture, such as Machu Picchu. This is because the local environmental and climate suit both birds and humans. Machu Picchu is located in the humid low Urubamba basin within the pleasant climate if the Vilcanota Valley that was the home of Inca culture. Some of the rarest Andean birds are can be found in areas of the forests that surround the more remote Inca ruins and terraces of the area.

Habitat disturbance in these areas is nothing new. Evidence from lake sediments suggests that the Machu Picchu area was totally deforested over several thousand 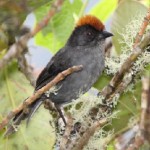 years ago. The Incas, however, subsequently introduced sustainable agricultural systems. This, combined with a climatic warming period from about 1100 AD, encouraged the return of the natural forests. However, when the Spanish Conquistadors arrived in Peru in the 1500s, farming practices changed and the forests became increasingly overexploited. Nothing has

radically changed since then and over usage of the forests has continued until today. Unfortunately meaning that many species in the Andes are now on the verge of extinction.

A difficult challenge for conservationists now is how to conserve biodiversity in areas close to tourist attractions and dense rural populations. Andean cloud forest is not suited to intensive agriculture as its shallow topsoil easily washes away once exposed. Construction of new roads has allowed larger areas of land to be populated and today much of the Cusco area is severely degraded. Highlands are routinely burned to stop forest encroachment and provide pasture lands and there is even a local belief that the smoke from the fires can help bring rain to the dry mountains. Today the treeline is located far below its natural position, and possibly only a few percent of the Polylepis forest remains. Intern this forest is fragmented into isolated patches where some of the world’s rarest birds still just about survive.

Today there is often a conflict between the poverty driven pressures of the Andes and conservation needs of the natural environment. Getting the balance between the needs of people and wildlife can be 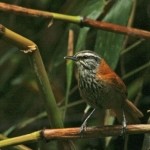 challenging in a country such as Peru, where social and economic problems inevitably take priority. Conservation strategies include building a series of reserves, and improving farming practices, with education as the forefront of change.

Conservation of natural habitats is further complicated by the fragmentation of birds. Studies at London’s Natural History Museum have shown that 28 target areas of conservation are needed to protect the majority of Peruvian birds.