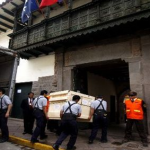 This Wednesday the second of three deliveries arrived into the Inca Capital Cusco from the Peabody museum at the University of Yale. The delivery was specially flown to Cusco’s Alejandro Valesco Astete Airport aboard a Peruvian Air force Hercules flight. The consignment of 26 large boxes mainly consisting of bones was taken to Casa Concha (The Shell House) in the Colonial centre of Cusco.

Casa Concha, which has been under restoration for more than four years, is ready to house the artifacts escavated by Hiram Bingham between 1911 and 1915. Casa Concha is owned by San Antonio Abad University and has been prepared to house thousands of archaeological pieces returning from Yale University.

In recent years much controversy had surrounded the rightful owner of the artefacts, and Peruvian historians and government officials alike engaged in a length negotiation process to have the artefacts returned to Peru.

Studies of the artefacts will continue in Peru in conjunction with Yale University and the University of San Antonio Abad of Cusco, along with several other institutions and investigatory laboratories. The studies are intended to further understand more about the lives of the population of the famous citadel of Machu Picchu.

The first deliveries of artefacts arrived in Peru at the end of June this year, and were placed on exhibition within a few days at the Government Palace in Cusco. The third and final consignment of artefacts is planned to be shipped at the end of 2012.