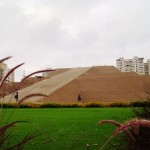 If you are into archaeological sites and specifically ´huacas´(sacred burial temples), it is worth visiting the Huaca Huallamarca located in the heart of San Isidro, Lima. It dates back to the sixth century and was used initially by the Huallas. It especially stands out because of the sharp contrast it forms with the modern buildings surrounding it. It consists of a temple, a cemetery and an urban area.

Quick Tip: When in Lima check out Pool Paradise Lima, the only hostel in Lima with a pool. Located in the heart of Miraflores, it is the perfect place to relax by the pool in the sunshine.

The building was constructed with small adobe bricks (mud bound with straw / hair) painstakingly made by hand, stacked to make platforms creating several levels. The design enclosed squares, patios, corridors and restricted areas, all painted with an ochre yellow. The final size of the pyramid was achieved after several stages of construction and re-modeling. Considering the size and characteristics of Huallamarca it is believed that it was a temple of high rank.

As time went by new urban centers of the Lima culture appeared in the valley and Huallamarca was abandoned as a temple, after which inhabitants of the area started using it as a cemetery. In the end Huallamarca served as a human settlement for the Incas, who created terraces on the lower east side of the pyramid to build a village consisting of living quarters, patios, store rooms and kitchen areas.