2020 Updated Information: Everything you need to know for visiting Kuelap, from your options for getting to Kuelap, to what to expect while you’re there. 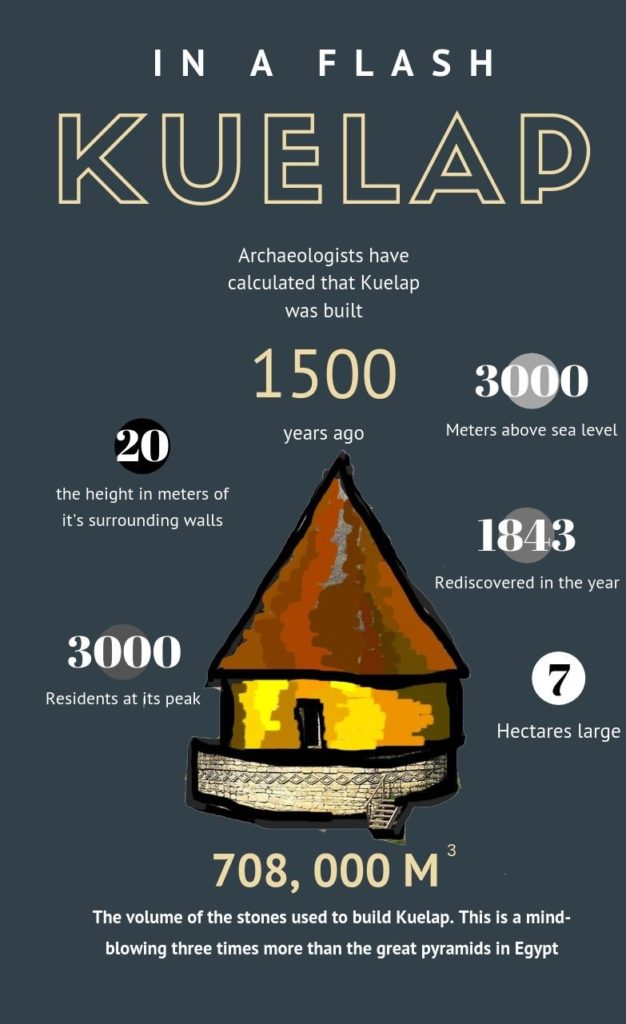 The ancient city of Kuelap is guarded by towers and is found in the Amazonas region of Northern Peru at the peak of a mountain. Kuelap dates back to pre-Inca and the main archaeological site of the Chachapoyas culture and is regularly considered to be the ‘Machu Picchu of the North’, being dubbed as one of the seven wonders of Peru in 2008.

The city and its walls were built somewhere between 500 and 800 AD, meaning that it has been around for 600 to 900 years longer than Machu Picchu. It is made up of more than 400 buildings. One of the main reasons why it was so well preserved was the protection it gained from nature, which becomes obvious when it is seen from above. The journey alone is an adventure worth taking, and the city overlooks the Utcubamba Valley. Time and time again visitors marvel at the views of the cloud forest that surround the area.

For a long time archaeologists believed Kuelap to be a fortress, however, the lack of defensive marks and extensive studies have led experts to believe that in fact, the area has more of a religious significance which is why today it is considered to be a fortified city or as a refuge, with covers for rain and bad weather every 500 meters or so. The site is over a kilometer long and divided into three parts. The largest and most interesting of these three parts is the fortress that lies in the middle, 700 meters long and made with huge stone blocks, each weighing up to 200 kilograms. Visitors are also amazed by the huge walls built to protect the area, measuring an incredible six stories high. As Kuelap was, theoretically, a fortress, the entrances only leave room for one person to enter at a time.

The Discovery of Kuelap

Evidence suggests that the Chachapoyas culture abandoned Kuelap around the time of 1532. After this, the complex was hidden within the cloud forest and fell into ruin. It was rediscovered in 1843 by Juan Crisótstomo Nieto, a judge who had other business in the area. He was so taken by the structure that he wrote a book about it, titled “A Tower of Babel in Peru”. It was only fully documented by the archaeologist Alfredo Narváez in 2007.

Kuelap has a mild climate, with a maximum temperature of 23°C, and a minimum of 13°C. When planning your travels, remember that Kuelap is located in a cloud forest, so humidity is likely to be high. It’s wise to wear a light waterproof jacket, with a jumper underneath. As always, we also recommend walking boots or sturdy shoes.

If you want to visit Kuelap by yourself then you can take a car or a combi, which is a sort of group taxi that can carry up to 20 people, to the town of Nuevo Tingo. Nuevo Tingo is around 2 hours from Chachapoyas, and the journey will cost each person 8-10 soles. From there, you can get on a public bus that will take you directly to the cable cars. The cable cars cost 20 soles for a round trip. Alternatively, you can take on the 3-hour hike up to the ruins.

Getting the Kuelap Cable Car

Kuelap’s cable cars are a unique and interesting feature for you to experience on the journey to the fortress. Along with an impressive view of the surrounding forest, riders gain 670 meters of elevation with ease and comfort. The cable cars of Kuelap cover four kilometers of tough, uphill climb in just 20 minutes, and you pass through a layer of cloud, giving you a wonderful view before and after.

The cable cars run every day of the week, between 8 am and 6 pm and the buses from Nuevo Tingo run to the departure platform every ten minutes. There are no restaurants or shops in Kuelap so remember to take a snack and some water with you. 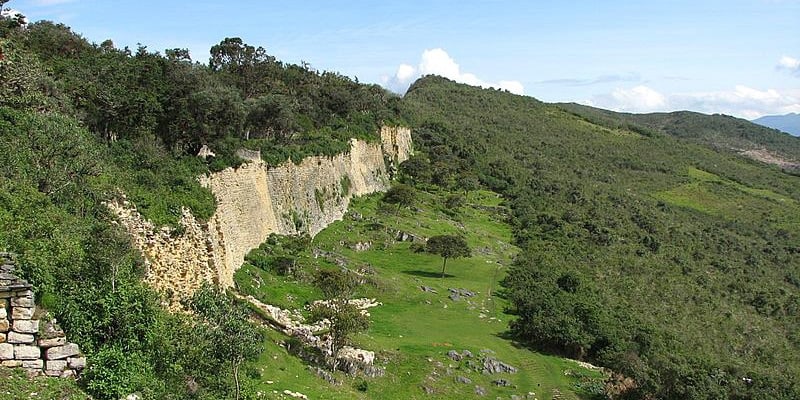 Many people like to walk to archaeological sites in Peru, and it’s not hard to figure out why. When exploring sites that were made way before the motor, some believe that the hike there gives you a more “real” experience of the place. After all, hikes to Machu Picchu are endlessly popular, and for good reason. There are two or three different ways that you can choose, but the most popular sets off from the town of Tingo located at the bottom of the hill. The walk is heavily signposted and directions are clear, so you are unlikely to get lost. If you are traveling from Chachapoyas then you will need to get a collectivo to the town of Tingo.

The walk is steep and challenging, with 5 points of rest on the way up. You will then arrive at one of Kuelap’s minor entrances, where you will be charged the 20 soles entry fee. Make sure that you have the right change with you, or risk walking an extra two kilometers round to the main entrance.

Be aware that the walk up is in direct sunlight, so if it is a hot day then you will get dehydrated much faster. Plan accordingly, and pack a sunhat, sunscreen and extra water. There are no shops on the way up, so make sure that you have everything you need before you leave the town.

Taking a Tour of Kuelap

You can take a tour of Kuelap that leaves from Chachapoyas in the morning. This tour will cover all of your transport and the tour guide, usually costing around 120 soles per person, in groups of around 15 people. You can book your tour in advance on Find Local Trips.

The Chachapoyas culture had a very strict funeral ritual that was routinely followed. However, the remains of men of all ages were found outside one of the houses. Because the usual funeral rituals were not followed, it is heavily suggested that these bodies were the result of a massacre. Historians’ best guess is that this is the result of a conflict between local families. This is because there were no signs of swords or weapons that would suggest it was the work of either the Incas or the Spaniards.

There are three main entrance points to the site. Entrance number one was previously used for the delivery of food and water, and you can even see the hoof marks of the llamas that were used for this in the rocks. The second entry was used by the villagers returning from the fields and leads to a cemetery just outside of the citadel. The main entrance used by the people of the Chachapoyas culture is actually closed to the public for security reasons, as it is at risk of collapsing, although restoration work is underway. 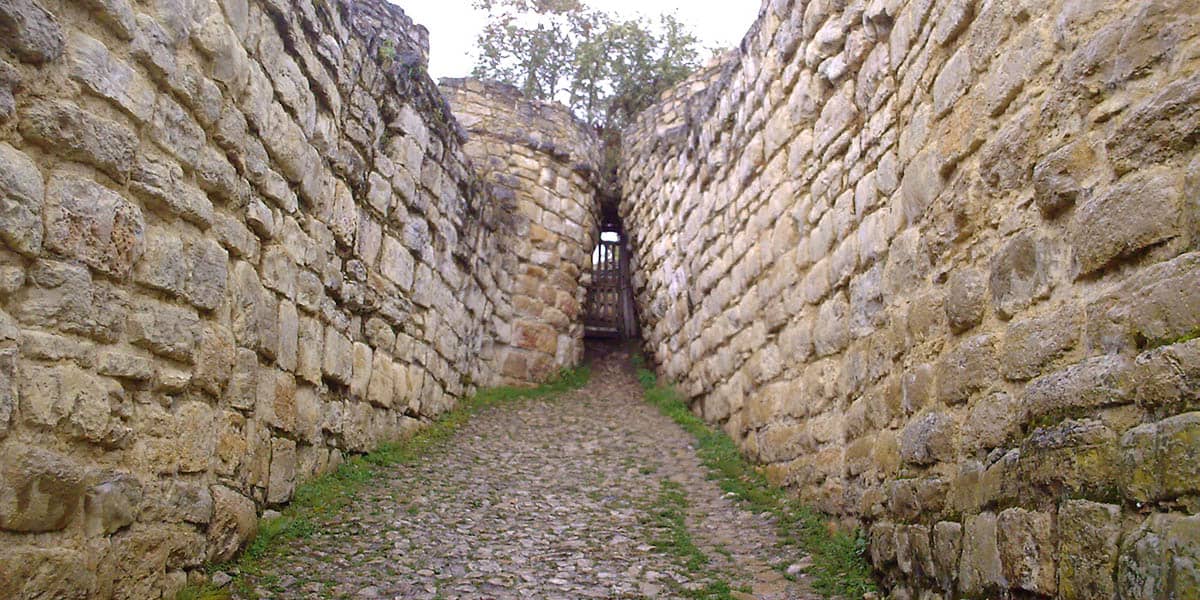 The Round Houses of Kuelap

Once inside, you are immediately met with the area that people lived in, and where most of the round houses are located. These round houses are an exclusive feature of the Chachapoyas culture. They are mostly in ruins; previously a replica was built to help visitors to picture the town, but after much debate, it was torn down in order to avoid unintentional distortion of history. This is in keeping with the Peruvian government’s stance on not rebuilding historic monuments.

There were approximately 420 houses on this first level. In each house lived a large family of about 8 people. In these houses, you can find places to make a fire, traces of large stones used for grinding, and at least two or three graves. This is a typical feature of the Chachapoyas culture.

The atmosphere here is mystical as this part of the citadel was not cleared. As a result, it is still covered with vegetation of all kinds, including wild orchids. You can easily imagine how the people of the Chachapoyas culture lived here. 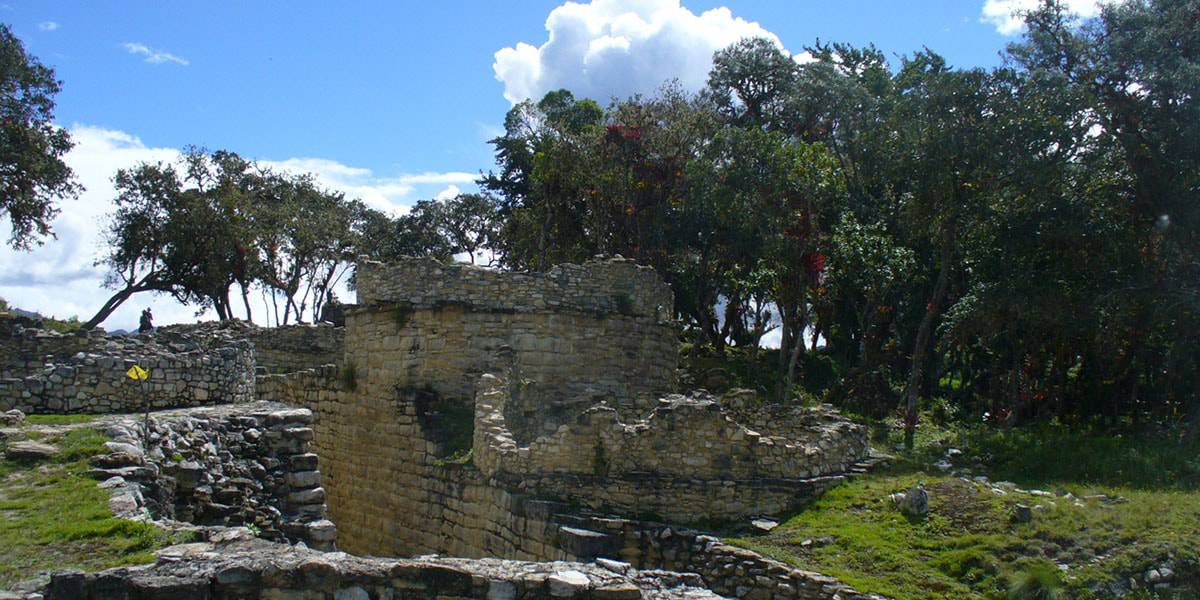 The Inkwell (or Templo Mayor)

One of the most important structures of the site is the Inkwell, otherwise known as the Templo Mayor. A cylindrical monument can be found, known as the “Tintero”. This is a highly religious place, and inside remains of human bones can be found. This implies it was the location used for human sacrifice. Bones have been found here which date back to before 0 AD, meaning that Chachapoyas culture is older than previously thought.

The Second Level of Kuelap

The second level of Kuelap is the area that the most honorable and religious people in the city lived. You can find a watchtower named El Torreón and a castle. The usage of the castle is up for debate- some argue that it was used as an operations room, others believe that it was the area for artificial deformation of people, specifically skulls, but other surgeries as well.

Interestingly, there is also some Inca remains in this pre-Inca site. A total of four buildings dating from the Inca era can be found. 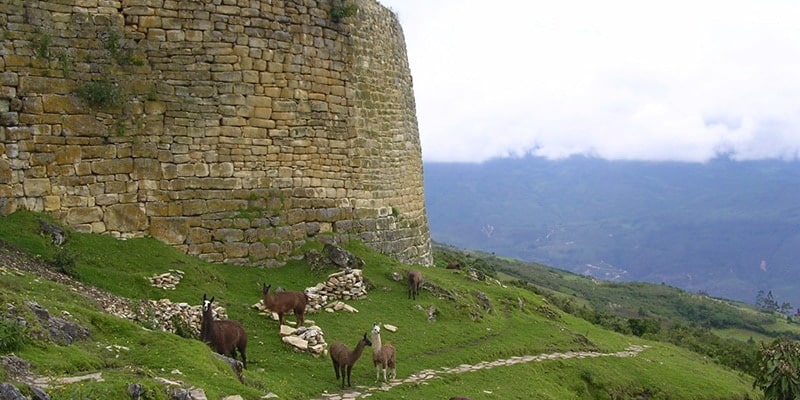 Kuelap is becoming more and more popular each year. There are huge ruins, incredible landscapes, beautiful wildlife and history in every rock. Discover for yourself: Kuelap, the city in the clouds.