Kuelap’s new cable cars have been operating since 2017. These cable cars were built with the latest technology and they drastically reduce the travel time to the top of the mountain where Kuelap lies on. Moreover, Kuelap’s new cable cars are the driving force responsible for the economic surge in the region. After all, Kuelap is an increasingly popular attraction which many call the Machu Picchu of the North. Keep on reading to find out more about Kuelap’s cable cars, Kuelap, and how you can visit it too.

It used to take a 1 hour 30-minute bumpy ride or a 4-hour hike to reach the top of the mountain where Kuelap is located. Now, with the cable cars, it only takes 20 minutes. These high-tech cable cars include weather sensors which operate on solar power to guarantee that the service operates under optimal conditions. Its 26 cabins move at an average speed of 6 meters per second with a capacity of 8 people per cabin. As a result, it can transport up to 1000 people an hour.  The price of the round-trip ride is 20 soles (about $6 USD). Additionally, the cable cars have a bus station located at the nearest town, Nuevo Tingo. 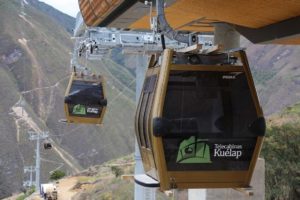 It is the largest stone ruins in the Americas covering an area of 1,112 acres. It was built around 500 AD which makes it almost three times older than Machu Picchu. The site consists of over 400 buildings located at 3000 meters above sea level and its architecture is quite different in style from the Inca’s. The site was a Chachapoyan city which homed about 3,500 people.

The city is divided into a high and a low sector. The High Sector or Upper Town contains 80 circular buildings, 3 rectangular structures, and 2 narrow entrances in the east side of the city. The Low Sector or Lower Town contains 335 circular buildings, 2 rectangular structures, and 2 large access points. Some of the structures are decorated with geometric friezes of diamond and zig-zags shapes. The site also features an outer wall of about 60-feet (18.5 m) high which experts think had a defensive purpose. 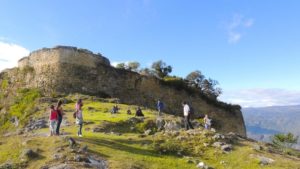 
The name Chachapoya was derived from Quechua and it means “cloud forest”. The Chachapoyans received this name by the Incas who managed to conquer them after many bloody battles. The Chachapoyans were ferocious warriors with impressive skills, which the Incas struggled to defeat. Their reputation was also known to the Spanish as evidenced by Juan Polo de Ondegardo who referred to them as “great sorcerers and skilled herbalists who make poisons.”
DISCOVER PERU LIKE A LOCAL ONLY WITH PERU HOP

Fun fact: The myth around the Chachapoyans served as an inspiration to part of the plot of the famous Indiana Jones movie “Raiders of the Lost Ark”. 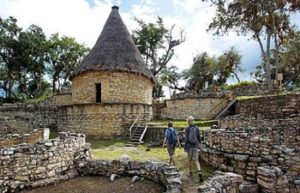 How to get to Kuelap from Lima?

The closest town to Kuelap is Tingo which is a 50-minute drive from Chachapoyas, the capital city of the Amazonas region (one of the 24 regions of Peru, that are referred to as “departamentos” in Spanish.)

By plane and bus:

A direct bus from Lima can take anywhere between 22 to 24 hours.

Once you reach the Tingo town, you can take the buses servicing the cable cars which are about 10 min away. The hours of operation are 8am to 4pm every day.

Although the site is open all year round, it is best to go between the months of April and October when the rainy season is over. Additionally, Chachapoyas has an annual fair between June 1st and 7th which exhibits food, handicrafts, activities and more. 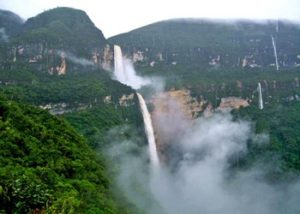 Lastly, the region of Amazonas has many other activities to do while you are there. Do not miss out on the fun and visit some other attractions such as Gocta waterfall, Karajia sarcophagi and Quiocta cavern. To find tours, top operators and get the best value for your money, we recommend FindLocalTrips.com, a search and comparison website for tours and activities across South America.