It’s nearly upon us…..the buzz and hype of Inti Raymi. Here’s our guide to the fun filled day in Cusco. Inti Raymi (Festival of the Sun) is an Incan festival held in Cusco on June 24th. In the southern hemisphere, the winter solstice falls a few days before this date. Tens of thousands of visitors flock to Cusco to witness ancient Incan traditions.  Reenactments of Incan ceremonies that celebrate the sun god take place at the ruins of Sacsayhuaman, just above Cusco.  Plays and folklore performances are put on for tourists and locals. Join in the revelries by heading up to the archaeological ruins and watch the festivities unfold.

What’s It All About?

During Inca times beliefs revolved around nature and mother earth (Pachamama). Their main festivals and ceremonies were associated mainly with the sun and the moon. Inti is the god of the sun. The Goddess of the moon is known as Mama Quilla. These beliefs can be thought of as pagan and are similar to the beliefs of pagans throughout the rest of the world. The changing of seasons and harvests were of great importance to the Incas.

According to Garcilaso de la Vega, a chronicler, Inca Nobleman and son of a Spanish conquistador, Inti Raymi was created by Inca Pachacutec to celebrate the winter solstice and the beginning of the new year in the southern hemisphere. The celebration was said to last nine days, with colourful processions and dancing and led up to the beginning of the ploughing season. It took place at Haukaypata, close to where Plaza de Armas is now. They feared that the sun would not return and so the Incas gathered to pray to the sun god and hope for its return.  Llamas were sacrificed and burned, and in years of great hardship or even in celebration, children were sometimes sacrificed to the sun god.  The ruling Inca and other nobility welcomed the first sights of the sun by chanting and surrounding themselves with sacred mummies of past Incan royalty. 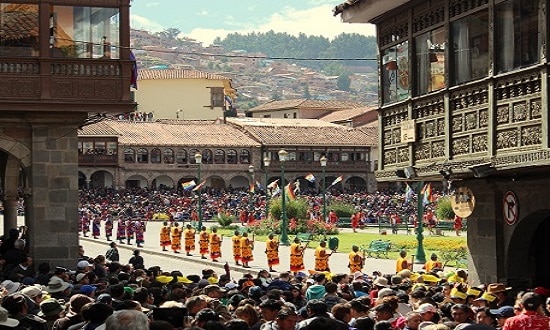 Spectators Fill the Plaza Ready to Watch the Show

In 1572 the festival of Inti Raymi was banned by Viceroy Francisco de Toledo because it was believed to be a pagan festival and not conform to the Catholic religion.  However, people stuck to their pagan beliefs and continued to celebrate in secret. In 1944, a Peruvian academic, Faustino Espinoza Navarro, brought the festival of the sun back to life. He hosted reenactments of the sun festival based on de la Vega’s chronicles. 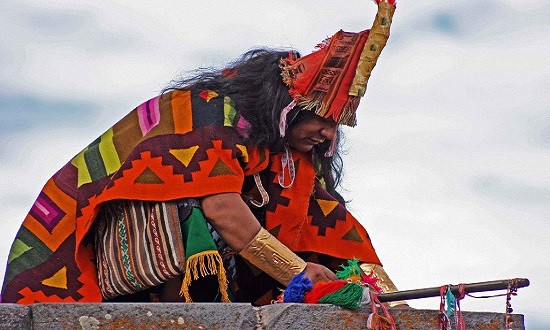 The Festival of Inti Raymi, at Sacsayhuaman

The 21st century celebrations of Inti Raymi have become a lot more commercialized and elaborate, mainly to attract the tourist.  Local businesses sponsor the festivities and no doubt make a small fortune on the 24th June. Some say that the festival is only about 5% accurate and 95% fantasy in its celebrations. It’s become more of a modern day party with mock animal sacrifices, football matches, performances from actors dressed in Inca attire, with dances and parades. All of Cusco, locals and tourists, fill the streets to watch and follow the dancing procession that carries the Inca emperor to the ruins of Sacsayhuaman. The festivities begin at Qoricancha, The Ancient Inca Sun Temple, on Avenida del Sol, when the four representatives of the Four Suyos (ancient Inca regions) arrive in traditional costume. The crowds then go wild when the Inca Emperor arrives. He will then call on Inti, the sun god, to return. After this prayer of praise to Inti the procession makes its way to Plaza de Armas. Here, coca leaf readings take place, in hope of good fortune and a prosperous forecast for the New Year. The pilgrimage then continues up to the final stage in Sacsayhuaman. The Inca Emperor delivers his final speech here before sacrificing a llama to Inti. The ceremony continues and finishes with traditional music and dance.   No matter how close or far from Inca tradition, it’s still a great and unforgettable day of celebration in Cusco. 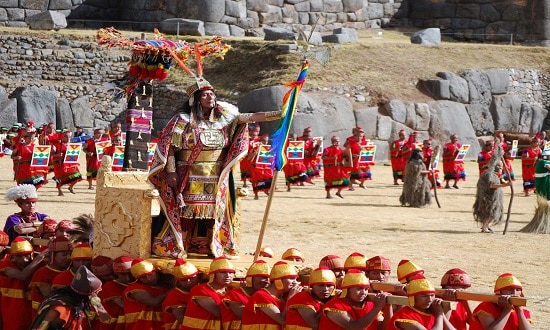 This is the most popular of all festivals in Cusco. If you intend on visiting and staying in Cusco in the week running up to Inti Raymi and the week after the festival be sure to book well in advance. Accommodation prices shoot up at this time of year and can be completely booked out months in advance. Try to book you trip; accommodation, flights, buses, tours etc. at least six months, if not longer, in advance of travelling. Also remember if you intend to do Machu Picchu book it well in advance as prices rocket or there will be no availability.

For more information on Peru vacations contact us, to help you plan an unforgettable trip.