Mistura is Latin America’s largest gastronomic event, and is held annually in Peru’s Capital – Lima. A celebration of Peru’s rapidly growing culinary scene, Mistura brings together more than 200 of the country’s leading restaurants along with wine, pisco, chocolate and many other producers. Here is our guide to Mistura, highlighting everything you could ever need to know about this sumptuous festival!

Inaugurated in September 2008, the festival originally called Perú Mucho Gusto, attracted 30,000 visitors and was held in the district of San Martin. Over the last 6 years the event has grown rapidly, and in 2014 the turnout is expected to be around 500,000 visitors (currently happening). The event has had several different locations throughout Lima, but the last two years have seen it settled on the newly developed coastal area of Lima’s Costa Verde in the district of Magdalena del Mar. The event which stretches about a mile along the coast, covers a whopping 11 acres is divided up into 13 specialty food areas and has a large central market and auditorium. Lasting 10 days, Mistura offers visitors the chance to taste just about every typical dish, flavour and ingredient from the coast to the highlands to the Amazon.

The Food Worlds or “Mundos”

Mistura is divided up in to 13 “Mundos” or Worlds (individually listed below). Collectively they cover every type of traditional dish, dessert, snack and drink from around Peru. Along the length of the coastal promenade these 13 worlds represent every region of the country and type of traditional food found within them. It is quick to realize which of the individual kitchens are the most popular as they normally have the longest queues!

Mundo Andino y Amazónico – A world that combines unique and often unknown ingredients from the Amazon and unique flavours from the Andean highlands. Look out for the fried cuy (guinea-pig).

Mundo de los Bares – A great place to try many of Peru’s best cocktails like a chilcano, a pisco sour or perhaps a tasty maracuya sour.

Mundo de los Dulces – Quinoa ice cream makers and Peruvian chocolatiers are among the 50 or so vendors in this section.

Mundo del Sur – A section dedicated to traditional dishes of the Arequipa Region. If you like a spicy kick to your food then this is the place to try rocoto relleno.

Mundo de las Cevicherias – Pick from a handful of Peru’s best cevicherias and enjoy one of Peru’s most famous coastal dishes.

Mundo Crollo – Traditional Peruvian dishes with a European influence is what you’ll find here. Duck with rice, tacu tacu and Aji de Gallina are not to be missed.

Mundo de los Liquidos – A liquid taste of Peru. Fresh juices, punches, coffees and strange herbal teas amongst others can be found in the World of Liquid.

Mundo Cervecero – A large tented area that showcases all of Peru’s commercial beer manufacturers and a handful of local artisanal producers. 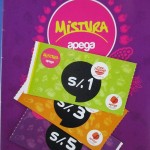 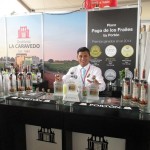 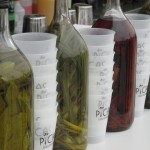 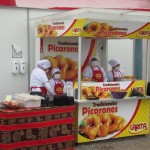 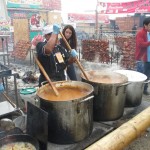 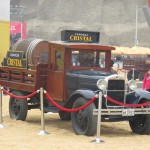 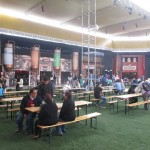 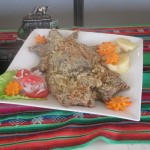 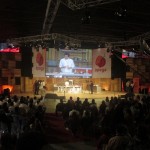 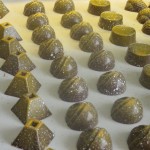 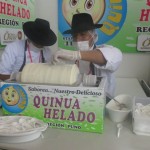 Other Areas of Interest

In addition to the 13 food worlds, there are also several other attractions at Mistura.

Mistura Gran Mercado – If you’ve been inspired by the great selection of Peruvian food at Mistura, then the Gran Mercado (Main Market) is where you can source all of the ingredients needed to cook it for yourself. Hundreds of vendors sell all sorts of Peruvian ingredients, many of which you have never heard of before. Cash and even credit cards are accepted in the Gran Mercado. Be sure to buy something to take home as a memento, as here you’ll find only the best producers in Peru.

Gran Auditorio – Mistura’s Main Auditorium is located right in the middle of the festival and is free to enter. Each day the auditorium hosts a wide variety of events from regional cooking competitions to cooking classes to topical food discussions. Seating around 500 people, the auditorium is a great place to relax whilst making space for some more of the great food at Mistura. Note: as this event is in Peru, you’ll need to brush up on your Spanish to get the most of what goes on in the auditorium.

Mundo Infantil – If you are travelling with young children, then you’ll probably want to base yourself around Infants World. Full of climbing frames, slides and general kid’s park equipment, here you’ll be able to kick back and let your kids burn off some energy whilst you decide on what you are going to eat next.

How Much will Mistura Cost You?

All visitors to Mistura need to exchange regular cash for Mistura money to be able to buy food at the event. There are exchange booths just past both principle entrance gates. Mistura money comes in denominations of 1, 3, 5, 13 & 17 Soles. Vendors will also give you change in Mistura money. In the Gran Mercado cash is accepted, and some vendors can even charge a credit card.

How Much are Dishes

The price of each dish varies depending on what it is. Principle dishes are typically S/. 13 each (some as much as S/. 17 each), whilst other smaller items like desserts, ice creams and juices are S/. 4 – 6 each. If you expect to stay around all day, then a budget of S/. 50 – 100 per adult would be more than enough for most people. If you like to wash your food down with a few beers then you might want to add another S/. 30 – 50 soles to that budget. Be aware that some drinks stands especially Pisco vendors charge anywhere upwards of S/. 60 for a shot.

Getting To and From Mistura

For foreign tourists visiting Mistura taking a taxi is by far the best and easiest option. From the hotel districts of Miraflores and San Isidro travel time on a normal day is about 15 – 20 minutes. However, during Mistura the travel time can be anywhere from 30 – 60 minutes. The price should be around S/. 12 (US$ 4 -5), but some taxis may want much more or not even want to take you at all (due to the traffic). From Lima Airport, Magdelena del Mar is about 30 minutes, and taxi will cost you around S/. 40 (US$ 14).

From Mistura the event organisers Apega recommend taxibeat and 3555555 Satelital. There are taxi stands at Mistura and prices are fixed (2014, Mistura to Miraflores was S/. 17).

Lima’s Metropolitano bus services has an established route that runs the complete length of Avenida Brazil terminating at Mistura. Avenida Brazil starts in Lima’s historic centre and runs all the way to Lima’s Costa Verde Coast. The service is not convenient for foreign visitors staying in Miraflores or San Isidro Hotels. The price is S/. 1 across the board.

Mistura happens in the month of September each year, but the exact dates can vary. The dates for the event are often not released until just a few months before, which can make it difficult to plan international travel. Check the official website for the latest information and event dates (see below).