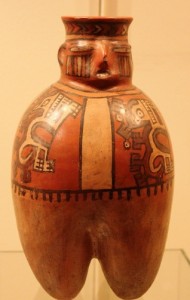 Wari Vase from the National History Museum in Lima.

Cusco is full of history, traditional and legend, it is often difficult to know where facts end and myths begin. Archeological records show that the region was occupied by other advanced cultures prior to the Incas, and carbon dating shows inhabitants in the area as early as 20,000 B.C.

Cusco was inhabited by small local ethnic groups without significant urban, religious or political development, until around 750 AD. At this time, the Wari culture from the Ayacucho region (north of Cusco) took control of the area. The Wari

introduced many modern changes including religion, tax, and political systems, and began the creation of the “highway network” which was later used and expanded by the Incas. For unknown reasons, the Wari civilization disappeared around 1000 AD, and multiple migratory tribes lived in the region until the Inca state was established around 1250 AD. 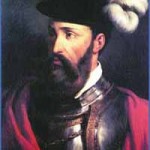 The Incas had no written language and their history was passed down orally, Francisco Pizarro and his Spanish conquistadors reached Cusco in 1533 and from that point written records were kept. As a result the pre-colonial history of Cusco is known only as it was told by the Incas  to  the Spanish –and in turn how they interpreted it.

According to legend, Cusco became the center of the Inca Empire when the sun create the first  Incas – Manco Ccapac and Mama Ocllo. The Couple rose from the waters of Lake Titicaca, and their mission was to find a suitable place to establish an empire. At the mountain of Huanacauri, Manco Ccapac plunged a golden rod into the ground until it disappeared. This point was called “Qosqo “meaning  Navel of the Earth.

The first Incas spent the better part of the 12th to 15th centuries ruling the immediate are just around Cusco and governing their small tribe of people. The Incas were one of several groups living in the Andean mountains during this time. A rival tribe, The Chankas, occupied region east of Cusco, and was on the verge of conquering the city in 1438. The Incan ruler at this time was Wiracocha, who was prepared to surrender to the Chankas. He rallied the Incan army and in two desperate battles defeated the Chankas. According to legend the Incan victory was a result of the boulders on the battlefields turning into warriors and fighting on the side of the Incas.

Pachacutec began the Incan Empires great expansion, which lasted from 1438 to 1527.During the 25 years that Pachacutec ruled the empire, he conquered most of the central Andean mountains, Pachacutec was a great military figure and also a visionary urban developer. He devised Cusco shape, which is that of a puma –an Incan deity – and channeled the Saphi and Tullumayu Rivers into the city, providing it with water. He terraced the steep mountains for agriculture, constructed numerous buildings, and decorated the Qoricancha temple in gold and silver.

Before the Spanish constructed the Plaza de Armas, The Incas had created an even greater plaza, which was divided by the Saphi canal. The space which today is the plaza de Armas was known as Aucaypata and the area now called Plazoleta Regocijo was known as Kusipata these two sides, formed a tremendous central square, which was the focus of  Cusco’s  social, religious and culture life. 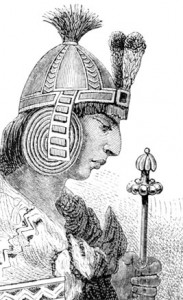 Pachacutec’s son, Tupac Yupanqui, was also a great leader, and in the 1460’s Tupac helped his father conquer the Northern Peruvian and Southern Ecuadorian mountains and the coastal area. Tupac succeeded his father as ruler in 1471, becoming the 10th Incan ruler, and the continued to expand the Empire. At the time of Tupac’s death in 1493 the Inca Empire extended from what is today Quito, Ecuador to Santiago, Chile.

Huayna C’apac, the 11th Incan ruler, was the last to rule over a united Incan Empire. Huayna C’apacc came to power after his father, Tupac, died. The Incan Empire was at this time very large. Nevertheless, Huayna C’apac extended his reach to what is today Ecuadorian/ Columbian border, although he was never as successful in expanding the Empire as his predecessors.

At the same time, the Europeans were discovering the new world. They brought with them not only guns and horses, but germs in the form of smallpox and the flu, which spread quickly across South and Central America. Huayna C’apac and his first son Ninancuyuchi both died in a smallpox epidemic around 1525, leaving the Empire divided between Huayna  Capac other two sons Atahuallpa and  Huascar – the Northern  part to  Atahuallpa and the Southern part, including  Cusco  to  Huascar.

In only a short time, a civil war broke out between the two brothers. In 1532 after several years of warfare, Atahuallpa defeated his brother Huascar and took control of the empire.

Meanwhile Francisco Pizarro and his Spanish Conquistadors were in Northern Ecuador and moving south.  Atahuallpa was aware of the growing presence of the strange foreigners, but was too busy fighting his brother to worry about them. However, by the middle of 1532 Pizarro arrived in Peru, and a fateful meeting was arranged between Atahuallpa and Pizarro. 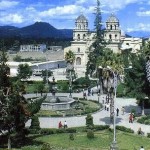 The meeting took place in Cajamarca on the 16th of November 1532. In the meeting, Atahuallpa was ambushed and captured by the Spanish, and the conquistadors proceeded to kill thousands of Incas. The Incas were in terrified awe of the Conquistadors superior weaponry and skilled horseback riding. Inca blood was ruthlessly let as the Spanish slaughtered Incan warriors armed only  with spears  and arrows.

While imprisoned, Atahuallpa  ordered his  brother Huascar to  be  killed for  fear Pizarro would return him to  power; and in an attempt  to  buy his  freedom, Atahuallpa  made his  famous ransom offer of  a room full of  gold and  two rooms  full of  silver. The ransom was brought from Cusco, and Pizarro sent soldiers to help strip  Qoricancha of its  gold and silver  ornamentation.

Pizarro later killed Atahuallpa and appointed Manco Inca, a half brother of Huascar and  Atahuallpa, as the new  Incan ruler. For three years the Empire remained peaceful under the joint rule of Manco and Pizarro. However, 1536 Manco decided to try and drive the Spanish out of the Empire. He fled Cusco, and charged back leading an army of over 100,000 warriors. He laid siege to the Spanish in Cusco and almost defeated them, but the Spanish eventually succeeded in a desperate battle at Sacsayhuamán.

In 1535 , Pizarro founded the new capital in Lima to  more  easily  maintain links with Spain. In  Cusco, all the  Incan  riches of gold and  silver were gone and  many  of  the  Incan buildings had  been razed to the ground with churches and  Spanish- style homes built in their  place. However, today, visitors can see that the Spanish builders never equaled the mighty architects and masons. 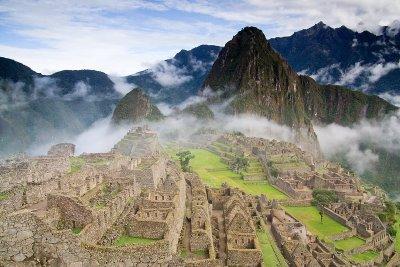 On the 28 th July 1821, The Peruvian people achieved what the Incan armies had failed to do and won their independence from Spain. Cusco remained a peaceful city until the “discovery” of Machu Picchu in 1911 by the American explorer Hiram Bingham; although proud Peruvians will remind you that the local people knew the ancient sanctuary – city was there all the time. Nevertheless, Cusco’s own history and archeological wealth and its proximity to Machupicchu, created the influx of adventure seekers and tourists that form the economic base of Cusco today.