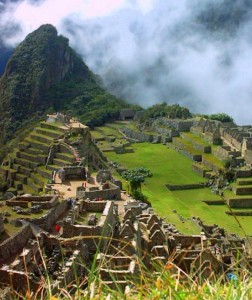 Machu Picchu survived the Spanish onslaught against the Incan Empire. But in the last few decades, it has suffered more threats to its architectural integrity and pristine Andean environment than it did nearly 500 years of existence. UNESCO threatened first to add Machu Picchu to its list of endangered World Heritage Sites and not to withdraw that status unless stringent measures were taken by the Peruvian government to protect the land mark ruins.

In 2001, a film company shooting a TV ad for a Peruvian beer company sneaked equipment into the site and irreparably damaged the stone Intihuatana near the top of the ruins. The camera crane operator was later sentenced to 6 years in jail.

Plans were once also considered to construct a cable car system from Aguas Calientes to the citadel of Machu Picchu ease access. The plans which were backed by the Peruvian government would have seen daily visitors increase two or three fold to some 4,000 visitors a day in peak season. Luckily these plans never went ahead.

Pressure from foreign governments, watchdogs and UNESCO also forced the cleanup and regulation of the historic Inca Trail. A permit system was introduced to regulate access, and fixed camping and toilet areas were put in-place. In a unique debt swapping initiative Finland traded 25 percent of Peru’s outstanding national debt (nearly US $6 million) for conservation programs.

The World Monuments Watch List of the 100 most endangered sites formerly included Machu Picchu, but was removed from the infamous list in recognition of the work the Peruvian government had made on the Inca Trail, Machu Picchu and the abolishment of the cable car system. However most recently it is back on the list over concerns of increasing tourism.