The Temple of the Moon located on the outskirts of Cusco is a fascinating and mysterious archeological site. Richard Nisbet takes a closer look at the rarely visited attraction and challenges some of the theories surrounding its origins.

The stone walls and carvings of the region of the Andes around Cusco, Peru raise a number of questions: How did they do that? Why did they do it that way? How old are they?

No one has ever given me a satisfactory answer to any of these questions.  The first two completely baffle me.  What baffles is not just the structures themselves, but the fact that often the stones were brought from a considerable distance.  Note that some of the stones in the fortress/temple above Cusco called Sacsahuaman were brought from a quarry called Rumicolca, which is about 20 miles distant over rough, hilly terrain.  Note also that some of them weigh up to three hundred tons.  As to why they built the way they did, the jigsaw puzzle construction of the cyclopean walls, one can only guess.  To transport, carve and fit the stones of Cusco’s walls would seem to be a nightmare for the stonemason.   It is interesting to note that the walls associated with the imperial period of Inca history are relatively small and rectilinear.

As for their age, I can only say this:  I believe the structures around Cusco are older than we are told by the experts; much older.  Cusco’s Temple of the Moon is a site that bolsters this belief.

Most tourists who come to Cusco take the city tour.  This includes four prominent ruins around the city: Sacsahuaman, Qenko, Puku Pukara and Tambo Machay. No one should miss these sites, for they are truly magnificent.

But there is a place that the hurried Cusco tourist usually fails to see.  It is called The Temple of the Moon, or Salumpunku. It is located between Qenko and Puku Pukara, but it is off the paved road and doesn’t fit conveniently into the Cusco city tour.

Panoramic View of the Temple of the Moon, Cusco

What is the Temple of the Moon

Cusco’s Temple of the Moon is a big hill with two caves inside it. The caves contain alters, and cracks in the walls let in sunlight or more significantly, moonlight that strikes the alters on certain nights. There are carvings in the caves:  a snake, a puma and some say a vagina. A hike up to the top of the hill will reveal carvings that seem to have no purpose.  (This is something that can be said about many of the stone carvings. It is as if those who did the work were just having fun, but it certainly looks like laborious fun.)

At the entrance to one of the Temple of the Moon’s caves is a carving that is anachronistic. It looks an awful lot like a member of the elephant family. Could it be a Mammoth or a Mastodon? These creatures haven’t existed in the Western Hemisphere for over twelve thousand years.  It begs the question, how old are all the stone carvings in the Temple of the Moon.

Beyond Cusco’s Temple of the Moon is an open area that has a number of Huacas, sacred sites.   Huacas can be anything from a tree to a waterfall, but these huacas are carved stone shrines. The remarkable thing about these stone carvings is the difference in weathering.

Huacas, beyond the Temple of the Moon

To my eye these carvings represent a vast difference in the time of creation. It seems highly unlikely that the Incas made all these carvings. The Inca civilization dates only from the early 12th century and these huacas appear to span a greater period of time.

“Authorities” want to tell you that most of the great stone structures of Cusco and the Peruvian Andes were constructed during the time of the Inca king Pachacuti in the mid-1400s AD.  That would include Sacsahuaman, Machu Picchu, Pisac and Ollantaytambo, not to mention the temples in Cusco itself. Don’t believe it. The Andean people around Cusco have been working these stones for perhaps thousands of years.

The stonemasons were either enormously patient, or had some way of shaping stone that is completely lost to us. Various methods have been suggested:  Perhaps there was a plant that could soften stone.  Or perhaps they had some way of melting stones with heat. These suggestions may be seem a little far-fetched, but less so than another oft- suggested answer.

It was aliens that did it. 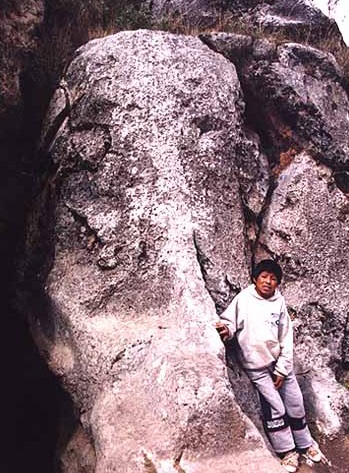 To get to the Temple of the Moon one takes a dirt road that branches off the Cusco – Pisac highway just beyond the archeological site of Q’enko. It leads up to a field from where you can see the mound of the Temple of the Moon on the other side of the field. Entrance to the Moon Temple is free and is un-governed by the Ministry of Culture (for now). A taxi from Cusco takes 20 minutes and costs about US$ 20 Soles (US$ 7.50 each way). It is recommended to take a taxi there and return to Cusco on foot (takes about 2 hours).