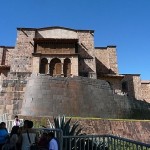 When the Spanish Conquistadores invaded in Peru over 500 years ago, Peru changed for ever. Much of the grandeur and splendour of the mighty Inca Empire was destroyed in a matter of months. Inca sites like Machu Picchu and Choquequirao were lost for centuries to the dense Amazon Jungle, but others like Ollantaytambo and Cusco were reduced to rubble as the city fell into the hands of the Spanish army’s. Korikancha in Cusco was no exception, and as one of the Incasmost spiritual and key buildings it was doomed to be destroyed.

Built by the finest Inca masons Templo del Sol (Temple of the Sun) at Korikancha was the most sumptuous temple in all of the Inca Empire, and more than 4000 priests and their servants lived there. Korikancha meaning ‘Court Yard of Gold’ in Quecha (the original Inca language), was dedicated to the worship of the Sun God Inti. The temple was constructed from the finest highly polished stone reserved only for the most important Inca buildings. It was adorned with life-size gold figures, solid gold altars and walls decorated with gold banding. Legend even told of floors and walls completely covered with gold. Korikancha also had a large solid gold sun disc that reflected the sun’s rays, bathing the temple in light. A life size replica of the disc can be seen in Lima at the Museum of the Nation.

Spanish chronicles depicted the opulence of Korkanca as – fabulous beyond belief, but interestingly in South America gold was abundant, and 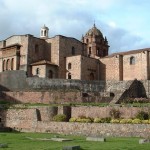 unlike the Spanish the Incas never thought of gold as a valuable; simply a beautiful material perfect for decoration. Ironically, much of the gold at Korikancha was used by the Incas to pay a ransom the Spanish demanded for the life of the kidnapped Inca leader Atahualpa.

When Cusco finally fell to the Spanish, Korikancha was destroyed, and over the next century the Catholic Convent of Santo Domingo was slowly built in its place. The Spanish made use of the superior Inca engineering, incorporating the intricate and interlocking stones as foundations for the new convent. Over the following years earthquakes severely damaged the convent, yet the well-constructed Inca foundations withstood the test of time, and only in recent years have the stone started to move. 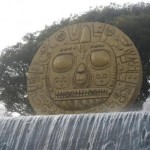 Located just a 10 minute walk away from Cusco’s main square – Plaza de Armas, Korikancha is a must see for all visitors to Cusco, and is usually included within the standard city tour. Entrance to Korikancha is not included as part of the Boleto Turistico General (General Cusco Tourist Ticket), and must be purchased separately.

If you want to keep planning your trip to Cusco, then check out our blog on the best way to get from Lima to Cusco!