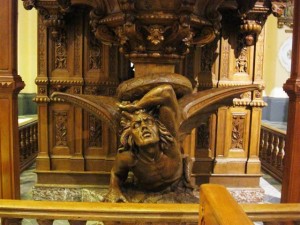 The impressive “Winged Devil” was built at the end of the 19th century.(Photo: RPP)

It was brought from France, 200 years ago, and it is unquestionably one of Arequipa’s biggest touristic attractions.

The “Winged Devil” is without doubt one of the most curious, intriguing and famous wooden sculptures situated in Arequipa’s Cathedral.

Culture regional director, Franz Grupp, explained to RPP it is an iconographic curiosity made in France at the end of the 1900s.

The pulpit was built in 1879 by Buisine-Rigot in Lilly, France, and donated by Javiera Lizárraga Comparet de Álvarez, a rich lady from Arequipa.

“The most interesting feature of this malicious figure is that it is located in the lower part of the Cathedral’s pulpit, with its wings, horns and serpent tail,” explained Grupp.

“From there the priest would preach during mass, in a symbolic way stepping on the devil, with all the weight and force of God’s word,” he added.

Grupp said that thousands of tourists are attracted to visit the Cathedral in order to see “The Devil”.