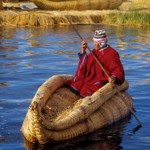 A busload of tourists crashed head-on into a truck high in Peru’s Andes on Wednesday, killing at least seven people, including three Dutch nationals and a Belgian, reports ABC News.

Another foreigner, whose nationality had yet to be confirmed, was also among the dead, prosecutor Gladys Jupanqui said.

The accident, which also left 20 people injured, took place in the town of Chaca Chaca, in Puno, in Peru’s south-east, close to the Bolivian border and scenic Lake Titicaca, highway police said.

At least 33 people were travelling in the bus to Bolivia, police said.