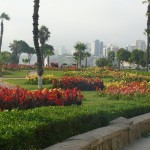 Once reputed to be the most beautiful and cultural city in Spanish America, Lima was founded by the conquistador Francisco Pizarro in 1535. For the next two centuries the city was the political, commercial and ecclesiastical capital of the Spanish viceroyalty which also at one stage or another encompassed Ecuador, Bolivia, Colombia, Chile and Argentina. The wide streets were lined with grand mansions, the shops were full of luxury goods from as far afield as Asia, the churches were numerous and ornate and the city boasted the first university in the New World. A major earthquake in 1746 and the establishment of other viceroyalties in Buenos Aires and Bogota signaled the beginning of Lima’s decline from the dizzying heights of power and wealth it had reached. Lima today is a sprawling and lively city which retains many fine colonial buildings but is overwhelmingly a modern metropolis complete with smog and crazy drivers.

For more information about Lima, visit our comprehensive Travel Guide to Lima in Peru. 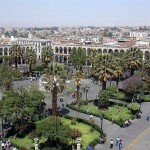 Arequipa, the ‘White City’, is Peru’s second city and is situated in a beautiful valley surrounded by snow-capped volcanoes. It is an architectural delight with numerous colonial churches and mansions, many of which were built with a pearly white volcanic stone. This may be where the nickname of the ‘White City’ comes from, although some people believe that this name derives from the fact that during the colonial period the city was populated by high class Spaniards rather than indigenous or mestizo (mixed race) people.

For more information about Arequipa, visit our comprehensive Travel Guide to Arequipa or the Official Arequipa Website. 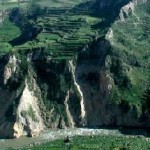 The Colca Canyon is held by Peruvians to be the second deepest canyon in the world (it is nearly 1km from cliff edge to canyon floor), whilst a slightly deeper canyon called Cotahuasi just a little further north. It is a spectacular place with steep, darkly forested sides, and the Rio Colca snaking its way around the gorge far below. The hills around were intricately terraced by the Incas and still farmed today by the local Cabana and Collagua peoples who live on both sides of the canyon in traditional villages. There are also Inca burial chambers on the hillsides, and the whole area is watched over by the volcanoes of Sabancaya and Ampato. Due to its rural location, the Colca Canyon is one of the coldest places in Peru by night. During the winter months (June to September) temperatures can plummet to below freezing point. Lodges and hotels will provide fire places, electric heaters and an abundance of blankets to mitigate this but it is not uncommon to have to wear warm layers in restaurants and in your room. Thankfully during the day, it is pleasantly warm and temperatures should reach the low 20’s Celsius.

For more information about Lima, visit our comprehensive Travel Guide to the Colca Canyon 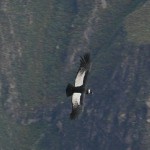 Condor’s Cross (Cruz del Condor, otherwise known as El Mirador), situated on top of one of the steepest sides of the Colca Canyon. It is in these forested slopes that the families of giant condors nest, and you are more than likely to see several take to the air and glide on the thermals. It is a place where the condors can swoop surprisingly close to the gathered observers, meaning that this can be a truly magical experience as the wingspan of these mighty symbols of the Andes (and the largest flying bird in the world) can reach 5 meters. 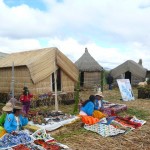 Puno is a town strung around the cold north-western shore of Lake Titicaca. It is not a particularly appealing town, but it is the place to begin trips out onto the legendary lake.

The highest navigable lake in the world, Lake Titicaca is a deep blue and icy cold expanse of water that has played a vital role in the myths and legends of the ancient Inca and Aymara cultures. Still today it is believed to be sacred to the indigenous people that live and work around its shores. Legend has it that it was from its waters that the sun god commanded his children Manco Capac and Mama Ocllo to rise, and they then created the Inca Empire.

For more information about Lima, visit our comprehensive Travel Guide to Puno 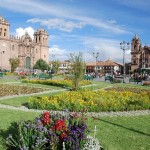 In the late 15th Century Cuzco was a glorious city, befitting its title as capital of the powerful Inca Empire. Designed in the shape of a puma, with its important buildings constructed from volcanic rock and decorated with gold, the city was a masterpiece of layout and engineering. Its Quechua name of Q’osqo means ‘Navel of the World’ and this derives from the fact that the city was the hub of a vast network of roads and trails that spread out into virtually the whole of South America. When the conquering Spanish arrived, they stripped the city of its treasure, and built their own city on the solid Inca foundations. This makes for a fascinating mix of architecture in the beautiful city of Cuzco today, where nearly every street reveals Inca walls, arches and doorways underpinning colonial churches and houses.

For more information about Lima, visit our comprehensive Travel Guide to Cusco

Introduction to The Sacred Valley of Incas 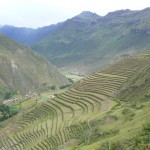 The astonishingly picturesque valley between the towns of Pisac and Ollantaytambo was at the spiritual and commercial heart of the Inca Empire. It is part of a long river valley that starts upstream of Cuzco in the south, and continues right on into the jungle before the Urubamba River (or Vilcanota as it was known to the Incas) merges with other Amazon tributaries.

The winding and fertile section known as the Sacred Valley of the Incas lies to the north east of Cuzco and is guarded throughout by ancient Inca citadels set high in the sides of the mountains, and in particular the Inca fortresses of Pisac and Ollantaytambo which stand watch at either end of the valley. It is a beautiful and traditional area that is not always as widely visited as it should be, as many people pass through from Cuzco on the way to Machu Picchu and do not stop to explore the valley.

It is an area of cultivated patchwork fields, locals in colorful traditional dress (that in some cases has changed little from the pre-Conquest days) going about their daily lives, bustling markets, elegant Spanish haciendas and breathtaking Inca citadels, temples and fortresses.

For more information about the sacred valley, visit our comprehensive Travel Guide to the Sacred Valley

This recently discovered hidden gem is another popular destination in Peru. This site is located at a short drive away from Cusco and it is a moderate yet rewarding trek to the top. The impressive and mysterious color patterns formed on the Ausangate Mountain range are simply captivating. Along the way, you will see wild llamas and alpacas peacefully grazing on fertile land, fresh water cascading down some snow-capped peaks and other beautiful Andean landscapes. Find out all the best tips that travel agencies do not want you to know as well as recommendations of top operators at rainbowmountainperu.com

Online Travel Guide to Peru
This site has been put together by travel professionals living and working in Peru, and is full of destination ideas, things to do, places to stay and restaurant reviews! Take some time to read through our Peru Travel Guide for other ideas, and contact us should you have any questions.
DISCOVER PERU LIKE A LOCAL ONLY WITH PERU HOP