Sometimes called “The Camels of the Clouds”, alpacas and llamas are tame animals which have been domesticated even before the Incas first appeared. You will casually see them walking and happily pose for a selfie at places like Machu Picchu and some other tourist attractions. However, they are part of a bigger family which includes distant relatives such as the camels and cousins living in the Andean neighborhood like the Guanaco and the Vicuna. In particular, these last two are a bit shy and prefer to stay away from fan’s flashlights and cameras. Although these camelids are often confused for each other, they all have distinctive characteristics that are interesting to know, especially if you plan on purchasing some clothing made with the fiber of one these cute animals. Keep on reading to find out this and other curious facts about them.

Llamas can grow to about five feet and weigh 300+ pounds. They were first domesticated approximately 6000 years ago by pre-Inca societies. Their eating habits of grazing on grass and needing little water along with its ability to carry up to thirty per cent of their weight for vast distances offered the Inca people great support and helped their empire flourish. 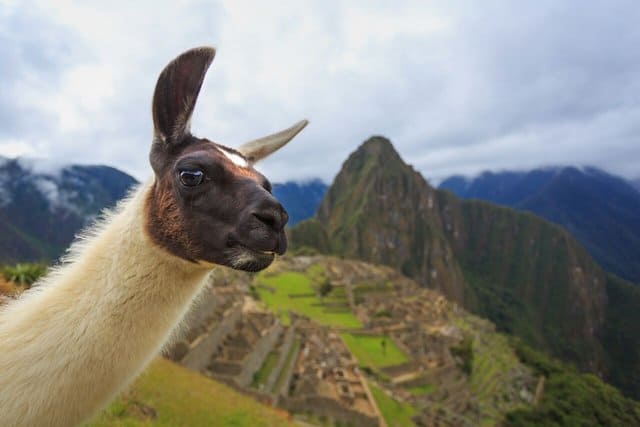 Llamas have a coarse outer coat and also a fine undercoat. The protective outer coat is usually used for rugs and ropes due to its rough texture. The undercoat can be used for finer garments. It is quite difficult to process llama fiber because of the necessity to separate the finer fibers from the coarse outer coat hairs.

Llamas tend to be independent and are actually quite helpful when it comes to guarding other small livestock like sheep and alpacas. They are generally easier to bond with than alpacas. Nevertheless, llamas tend to spit when they feel threatened.

It is the biggest of the four camelids. From the side, they generally have longer faces as well as longer ears than the alpaca.

Llamas’ native habitat is the cold and dry Andes rugged mountaintops as well as the high Andean plateaus of Peru and Bolivia. Nowadays, they can be found in other habitats including grasslands and farmlands of the Andean regions of Argentina, Chile, Bolivia and Peru.

It is believed that alpacas are hybrids of the vicuna and the guanaco created by ancient Incas. Alpacas were brought to produce quality fleece which was easily spun and woven into garments. These animals can grow to about 36 inches and weigh 100+ pounds. Alpacas have finer hair, which is very dense and fast-growing. Thus, they tend to have fuzzy faces. 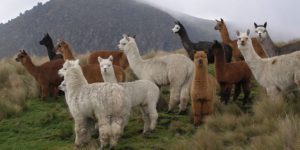 Though some people refer to it as wool, what grows from alpacas is technically hair because of its cellular composition. They are bred for their high quality, fluffy fleece which comes in a variety of 22 colors. The fiber produced is hard-wearing, soft, lightweight, water-resistant, warm, and hypoallergenic.

They use their tails to express feelings. For example, if they are bothered by something, they will twitch it back and forth. They can spit too if feeling threatened but are as less likely to do it than llamas.

Alpacas are shy and quiet, easy to train, and extremely intelligent. They have straight ears unlike banana-looking llama’s ears.

Peru has about 80% of the worldwide alpaca population and they are mainly found in central and southern Peru. They can also be seen in the Andean regions of Chile, Ecuador, and Bolivia. Nowadays, Alpacas can be found in other parts of the world outside South America where they are raised in Alpaca farms.

We have put together an additional section below on Alpaca fiber to serve you as a shopping guide.

Two subspecies of alpaca are the most popular in the market: Huacaya alpaca and Suri alpaca. While the former produces a shorter and fluffy type of fiber, the latter produces a longer fiber. Suri alpaca is rarer, thus more expensive.

Some products are advertised as made of Baby Alpaca. Unlike what the name suggests, these products are not made from a new-born alpaca’s fiber. In reality, these products are made out of the first shearing ever of an Alpaca. The area of the underside of the neck and belly is the finest with fibers measuring 21 to 23 microns. Beware that because this so-called baby alpaca fiber is expensive, some unscrupulous producers tend to blend it with other fibers such as sheep’s wool to sell their products at a slightly lower market price. There is also a category of Baby Alpaca called Royal Baby Alpaca whose fibers measure a little less than 20 microns. 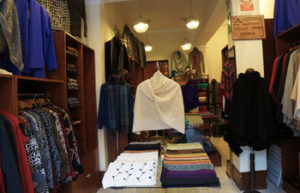 If you want the real deal, skip the local handicraft markets and head to boutiques like Sol Alpaca and Kuna. Nevertheless, you can still find quality items at some artisan markets like; Pisac, Cusco or at the Inka market in Avenida Petit Thouars, Miraflores, Lima just to name a few.

Guanacos are quite adaptable animals. They can even be found at altitudes around 4,000 meters above sea level. Their adaptation to low oxygen environments makes their blood rich in red blood cells. A teaspoon of guanaco’s blood contains four times more red blood cells than that of a human. They tend to grow to approximately four feet and weigh 200+ pounds. 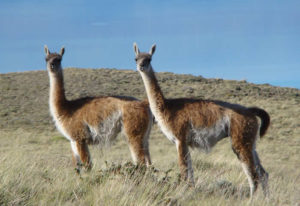 The guanaco resembles the llama in this aspect. They also have a coarse outer hair and soft undercoat. However, the quality of their undercoat fiber is only second to vicunas’ fiber. Their distinctive coloring is brown back, white underbelly and grey face.

Guanacos live in herds composed of females, their offsprings, and a dominant male. Bachelor males form separate herds. They can live where very little vegetation grows as long as they can get enough moisture out of it to complement their diet. They do not actually need to drink water.

They are smaller than llamas. Nevertheless, guanacos can grow to about 43 inches and weigh 198+ pounds. Their ears are small and straight unlike llama ears.

The majority can be found in Patagonia. And, also the Andes of Ecuador, Peru and Bolivia.

Vicuna’s are Peru’s national animal and feature on coins and the coat of arms. It is a wild and graceful animal, which is the smallest of the four camelids. According to an Incan legend, the vicuna was the reincarnation of a lovely maiden who received a coat made of gold after she married and old king. Thus, this animal was protected by the Incas and it was against the law for anyone but royalty to wear vicuna garments. After the arrival of the Spaniards, vicunas were victims of poaching to the point of extinction. Nowadays, there are strict rules and national protection measures to preserve them. 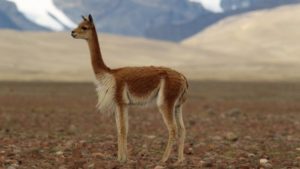 Its super-soft fleece produces the finest animal fiber in the world. Another reason why vicuna’s garments are rare and expensive is because a vicuna produces about one pound of wool per year. Moreover, one strand of vicuna wool measures 12 microns (i.e. 12 2q1 thousandths of a millimeter) which is 7 microns finer than the best cashmere.

As in the case of the guanaco, they also live in a herd where there is a dominant male, females and their juveniles. Vicunas are shy, alert and run away fast when they sense danger. Additionally, they are diurnal animals; however, at night, they go to higher altitudes to their special sleeping territory.

They are slender and have a deer-like appearance. They can grow to about 33 inches at the shoulder and weigh up to 150 pounds. Their coloring varies from reddish-brown to yellow on their heads, their necks are a pale orange colour, their chests, silky white and their backs a pale brown.

They are mainly found in National Reserves in the highlands of Peru as well as in high Andean regions of northern Argentina, Bolivia and in some parts of Ecuador.