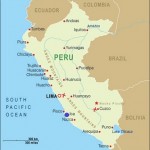 Rescue workers in Peru are trying to free nine miners trapped underground by a rockfall at a depth of more than 200m (650ft).

The miners are receiving oxygen and drinks through a hose.

But rescuers have so far been unable to get heavy machinery to the Cabeza de Negro copper and gold mine in the south of Peru.

They have communicated with the miners, who said the had no serious injuries but were feeling desperate.

The mine is located north of the city of Ica, more than 300km (185 miles) south of the Peruvian capital, Lima.

“They’re alive, but we can’t use diggers because of the difficulty of getting them up the steep hill,” rescue worker Erin Gomez told the AFP news agency.

Mr Gomez said he hoped they would be able to free the men later on Saturday or on Sunday, but he warned that the rescue could be delayed if there were any further rockfalls.

Cabeza de Negro is one of Peru’s many wildcat mines, where miners take high risks to extract copper and other metals.