Traveling away from Cusco, in the opposite direction from all of the other Sacred Valley highlights, you will eventually come upon the small village of San Pedro de Cacha. This rural village is the closest village to the archaeological site of Raqchi. The Inca site of Raqchi has many buildings and structures on its ground, each holding different purpose, with the Temple of Wiracocha (also known as Temple of Raqchi) being the most prominent. It is believed that the site was originally built as a control point on the main road system that originated in Cusco and ran to other sectors of the Inca Empire. There are many other speculated reasons for the other structures and areas in this site.  Some say that the structures were built as a type of barracks. Others suggest that the buildings were built for religious and administrative officials.

Wiracocha, was a deity, believed to be the giver of all life, according the Incas. He was the creator god. According to mythology this God created sun and moon. The temple was thought to be built to to appease him and furthermore honour him. It is said that he made fire fall from the sky and burn the hills of the area, in a rage of anger. The fire falling from the sky was lava from the nearby Volcano of Quimsa Chata. To ask for his forgiveness they built a shrine to honour him and give him offerings. The Inca Huayna Capac ordered the construction of the temple to recognise the event’s greater significance.

This enormous structure stands over 92 meters long (302ft) and 25.5 meters wide (84ft).  It is a two story roofed construction with windows and doors and a central adobe wall roughly 18 to 20 meters in height. On each side of the structure there is a row of 11 columns, built to support the building. The foundation is made from carved stones and rest made out from adobe and mud. The temple of Wiracocha is said to be specifically built so that people had to walk in a zigzag motion through it. This motion is related to the relationship between Wiracocha and Inca cosmology. 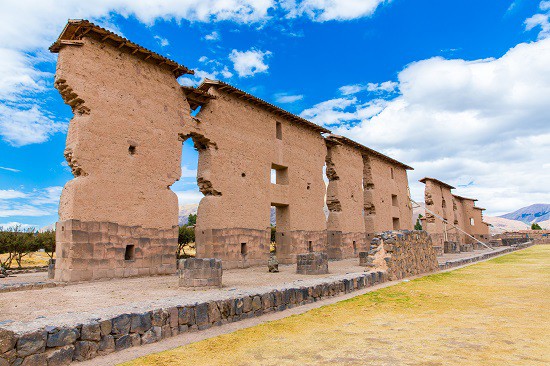 The Enormous Temple of Wiracocha

The site of Raqchi is huge, said to be one the biggest Inca archaeological sites ever. There are 12 living quarters attached to the temple. These are thought to belong to administrative and religious persons. The area to the west of the temple you can find ceremonial baths similar to those found on other sites. The complex also holds a large number of storehouses, approximately 150. These qollqas were used to store corn, quinoa and other grains, to feed the residents. There is also an artificial lake in the complex. The lake is fed by natural spring, through stone fountains. This lake was more than likely used for ceremonial purposes during Inca times.

Of course the Spanish found this Inca site and destroyed most of it. They rebuilt their own catholic church in the shadow of the remains of the once impressive Inca Temple. Before the conquistadors got to it, the temple of Wiracocha is believed to have had the largest single roof in the Inca Empire, stretching some 25 meters on each side and covering the columns of the temple.

Today, locals still celebrate the Raqchi Festival, which falls from June 16th to 22nd.  This festival is still very local with only very few tourists joining. The festival is an event full of folkloric music and dance with groups coming from places as far away as Bolivia. Locals dress in traditional clothing, there are food stalls serving typical dishes and Quechua women selling chicha beer.

Getting to The Temple of Wiracocha

The site lies approx. 125 km from Cusco. Buses from Cusco heading towards Puno pass within a few hundred meters of the main entrance into the site. These buses vary in price and comfort, ask your tour operator or hotel about the best ones to get. It is also possible to include the Temple of Wiracocha on a organised tour to the Sacred Valley.