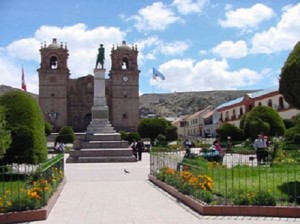 The City of Puno located in the south-east of Peru is the capital of its department, and sits in a bay at the western end of Lake Titicaca. With an elevation of 3, 830 meters (12,550 feet) above sea level, it is also one of the highest major cities in the Andes. The city was founded in 1668 by the Spanish conquistador Pedro Antonio Fernandez de Castro, and today it has a growing population of over 100,000 residents.

What to See in Puno

Although the city on its own is a rather drab and un-inspiring place to visit, Puno is a major stopping point for tourists visiting Lake Titicaca and surrounding areas. The city itself is limited in tourist attractions, and is really only used as place to rest before taking a lake excursion. A walk on foot around the City of Puno, close to the Plaza de Armas is a good way to take in most points of interest.

The most common excursion on Lake Titicaca is a combined trip to the floating Uros Islands and the traditional island of Taquile. This full day trip departs early in the morning from the small port in Puno, returning around 5pm in the afternoon. Tours can be booked a day in advance from the many independent travel agencies found in the centre (Suri Explorers, Jr. Theodoro Valcarcel 158). A homestay on the Island of Amantani is a popular choice the adventurous traveller. Whilst day visits to Isla del Sol & Luna are growing in popularity. On the outskirts of Puno is the ancient pre-Inca site of Sillustani. The Chullpas (funerary towers) date back to around 1,400 A.D. and are perfect to visit en-route to Juliaca Airport.

The City of Puno has a good selection of basic hotels through to high-end accommodations. Lower budget hotels are generally located close to the centre of Puno, whilst many of the upper-class hotels are located in Esteves, a tranquil setting away from the main city. For further information see our section on recommended hotels in Puno.

The City of Puno, dubbed Peru’s Folkloric Capital, is renowned for its colourful and spectacular festivals, rich expressions of traditional music, dance, and culture. Festival de la Virgen de la Candelaria (Virgin of the Candles) is the highlight of the festival calendar, and takes place each year during the month of February. Considered to be the third largest street festival in all of South America, the Candelaria Festival features a week of traditional dances and music from all over Peru.

Further information about the City of Puno, the region, and its attractions can be found under our Lake Titicaca & Puno Section. This Peru travel information is brought to you by the experts at the OnlyPeruGuide.com