The Inca Museum (Museo Inka) is located on Cuesta del Almirante, 103, in Cusco, on the walk up from Plaza de Armas to Plaza Nazarenas. The Inca Museum sits in an old 17th century building called Casa del Almirante, the former home of Spanish Admiral Francisco Alderete Moldonado. He built his Cusco palace over Inca ruins. The building was bought by UNAAC, an important university in Cusco, and is now run by university. The Inca Museum houses a great collection of artefacts dating back to Inca and Pre-Inca times. Some of the artefacts were found and excavated on historical sites in Cusco or close to Cusco, others were found in regions far away. There is a lot to see, read and take in so give yourself a morning or an afternoon to visit. Guided tours of the museum are available, in Spanish and English. You can organize this at the reception desk where you pay. 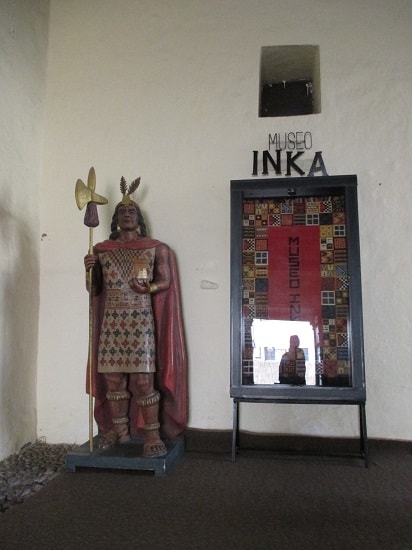 A Tall Inca Meets Visitors at the Enrance to the Museum

On the ground floor there are two rooms dedicated to exhibitions from Pre-Inca times. Here you will find information in Spanish and English on Andean Hunter Gatherers, you’ll see ceramic pieces from Puno, Paracas, Lake Titikaka that date as far back as 5,000 BC. There are ancient water holders, bowls, ceremonial items and ancient rock sculptures on show. The last artefacts you will see in the second ground floor room will take you up to the beginning of the Inca period. 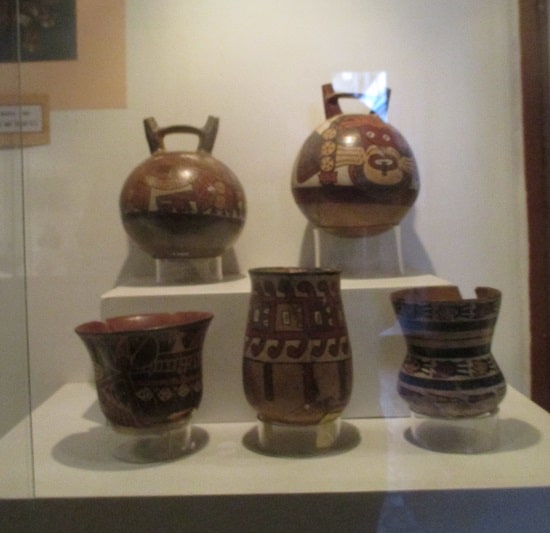 Ceramics on Display at the Inca Museum

Keep your ticket handy as you will have to present it again when you move to the upstairs exhibitions in the Inca Museum. There are numerous rooms and Inca exhibits on the upper floor to keep you occupied for hours. As you move through the exhibition rooms and displays you will learn about ancient Inca architecture. You will see techniques used by the Incas in building and construction. Techniques that you will see around the streets of Cusco. There are many old images of Machu Picchu before its excavation and clean up from 1912, taken by Hiram Bingham. The Incas worshiped the puma, there are many rock and wood sculptures dedicated to this animal throughout the Inca museum.

Presentations of Inca Art can be appreciated by visitors to the museum. Amazing pieces of Inca artwork like wood carvings, mirrors made from bronze, cups and bowls with decoration. There is beautiful jewelry like metallic bracelets and neck pieces on show. Cutlery and eating utensils used by the Incas are also on display. The Incas enjoyed festivals and music. There are many presentations of instruments and ceremonial objects. 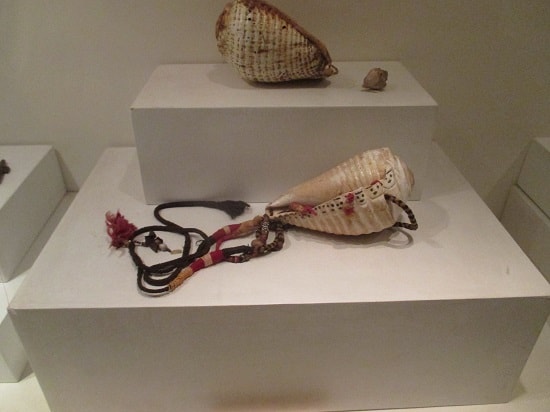 Decorated Shells used by the Incas as Trumpets

Some of the most interesting exhibits come nearer the end of the Inca museum. There are nine skulls presented in glass cases. These skulls reveal an ancient Incan medical practice known as trepanning. Inca doctors would remove parts of patients’ skulls if they suffered from any sort of cranium deformities.  Soon after the skulls you will encounter a tomb like room with real Inca mummies. The Incas would sacrifice children and adults to the gods, along with food and other possessions. The mummified bodies are still in really great condition and really show how the sacrificed passed away. There are about eight bodies to be seen including two children and an animal sacrifice.

Subsequently, the museum focuses on the invasion of the Spanish. The artwork, sculptures and the displays begin to illustrate change. The artefacts and objects on show demonstrate how the Incas dealt with the invasion and take over, how Christianity was introduced and how the great Inca culture was taken over. This is quite a sad part of the museum as we bear witness to the decline of an ancient culture.

Author’s Thoughts on the Inca Museum

The Inca Museum is an interesting one. However, it is a very big museum with lots of the more interesting exhibitions nearer the end. By the time you get to them you have traipsed through a lot of other material and can become quite weary. There is a lot to take in and see. Most of the displays have information in Spanish and English. However, there are some exhibits that have no information accompanying them at all. The Inca Museum is worth a visit during your trip to Cusco. It is informative, interesting and allows the visitor a good insight into how the Inca lived, worked the land and survived and adapted with the Spanish invasion. For anyone curious about Peruvian and Cusqueñan history pay the Inca Museum a visit.

How to Get There

The Inca Museum is only a short walk from Plaza de Armas. If you take the small road between the Cathedral and KFC as if you are walking to Plaza Nazarenas. The Museum is on Cuesta del Almirante 103, or Cordova del Tucuman, 103.

Tourists must pay S/10 to enter the museum. For students and locals entrance is S/5