The Historical Museum of Cusco is located in the once home of the famous, half Inca half Spanish, chronicler Garcilaso de la Vega. The museum is one of Cusco’s most visited museums and is well kept. The Historical Museum is located on the corner of Calle Garcilaso and Calle Heladero, just off Plaza Regocijo. This large building was turned into the Historical Museum of Cusco in 1946. The building is well maintained and has a beautiful court yard in the center.  As you walk into the museum there is a nice entrance way with welcoming staff. On first impressions the museum is well presented and laid out. It is a modern museum. Displays are clear to read and are in both English and Spanish. Guided tours are available to visitors. The museum is split into two different parts. The ground floor displays archeological pieces from Cusco and the Peruvian coast. The upstairs museum tells the history of Garcilaso and colonial times. It also has many displays of important artwork and paintings from the Cusco School of Art. 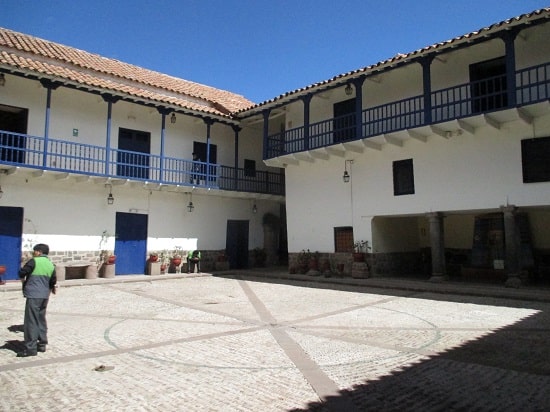 The Courtyard at the Former Home of Garcilaso

Two Parts to the Museum

The rooms downstairs are easily navigable for the visitor.  We can follow a display of artefacts in chronological order from Pre Inca times to the Inca period, not just from the Cusco region but from all of Peru. Archaeological objects such as tools, pottery, ornaments and weapons from different Peruvian cultures are on show in the museum. We can see artefacts from the Chavin culture, the Wari culture and other Andean organizations. There are many displays of the puma, the animal held in great veneration by the Incas. Ceremonial figures found at Sacsayhuaman, near Cusco, are on show. These figures were offerings made by the Incas to the gods. There are exhibits on argricultural methods used during different cultural periods in Peru. There is section solely committed to the potatoes of Peru. We are introduced to harvest and planting methods of these much appreciated vegetables.

As the visitor moves upstairs in the Historical Museum they are introduced to the New World. There is a large collection of artwork on show from the Cusqueñan School of Art. A lot of the 17th and 18th century work form the Cusqueñan School is anonymous. There are paintings in baroque style and mannerist style. Some of the paintings are beautifully done with oil on wood but are then mounted in big, gaudy gold frames.  Many of the paintings and sculptures depict the conquest of the Spanish. Two sculptures in particular show Spanish saints on horses with an Inca underneath being trampled or hurt.  There are rooms and rooms of religious artwork on display. Religious art was used by the Spanish as teaching material in evangelizing the new world. The great Tupac Amaru has an exhibit concentrated on him and his revolution. You can watch a short video on the great Inca warrior and learn of his fate. There is also a large mural illustrating how he was treated when the Spanish captured him. 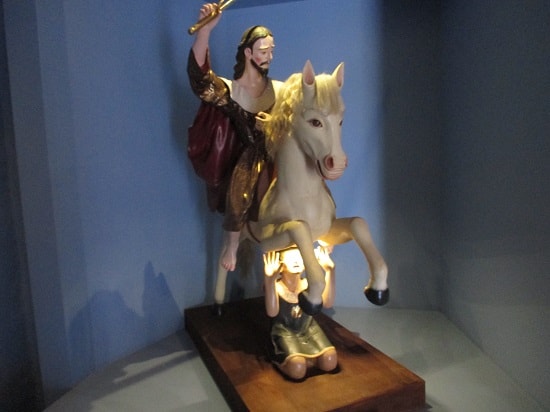 Sculptre Depicting the Conquest of the Spanish over the Incas

As the Historical Museum was once the home of Garcilaso de la Vega of course there are presentations dedicated to him, how he lived and what he did. He was born here in 1539. His father was a Spanish conquistador and his mother an Inca noblewoman. Garcilaso lived in Peru until age 21. When his father died, he then decided to sail to Spain to be recognized as his father’s son. He was taken under the wing of his paternal uncle there and spent the rest of his life in Spain. He died in Cordoba in 1616. He is most famous for his writings Comentarios Reales de los Incas, which was published in 1609. The Comentarios are divided into two sections. The first primarily depicting Inca life. These writings were based on stories and oral histories he had heard from his Inca relatives.  The second was based on the Spanish Invasion of Peru.

Thoughts on the Historical Museum of Cusco

I enjoyed my visit to the Historical Museum of Cusco. It’s a well-organized and easy to navigate museum with clearing signing in Spanish and English. In my opinion it’s the best museum on the Partial Cusco Tourist Ticket. The house itself that the museum is in is interesting, it was built in the colonial period but is built in Inca style.  It is now dedicated to the memory of Garcilaso de a Vega, the house he grew up in.  The museum gives us an insight into Pre-Inca, Inca and Colonial times. There is a lot of religious art to get through, which can get a bit repetitive and tiresome. However, you will leave with a better knowledge of the different periods in Peru. Unfortunately, the only way to visit the museum is to buy the S/70 Partial Cusco Tourist Ticket, and some of the other museums on the ticket aren’t worth the bother.