Built in 1560 and taking nearly 100 years to complete, Cusco Cathedral is an emblematic feature of Cusco’s main colonial square – Plaza de Armas. In 1928, Cusco Cathedral was granted Minor Basilica status, and became the official seat of the diocese (under the supervision of a bishop). The full name of the Cathedral is “The Cathedral Basilica of the Assumption of the Virgin.” Furthermore, the cathedral was designated a UNESCO World Heritage Site under the City of Cusco listing in 1983.

Layout of the Cathedral

Cusco Cathedral has a rectangular floor design and has 3 large wooden doors on its façade. The structure is made 14 cruciform pillars carved from Andesite stone (hard stone) which support 24 ribbed arched or star shaped ceilings. Many of the stones used in the construction of the outer walls of Cusco Cathedral were taken from the nearby Inca site of Saqsayhuman. The central nave is dominated by the principle altar which is embossed in silver and consecrated to Our Lady of the Assumption. To the rear of the central nave are the beautifully crafted choir stalls, made from pure cedar wood.  The cathedral has 14 side chapels which house various artworks, paintings, alters and statues of saints and virgins. 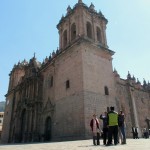 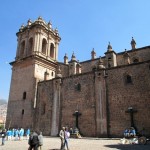 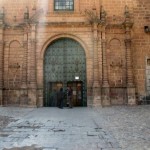 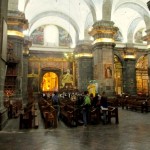 Inside the cathedral. main nave

Layout Map of the Cathedral 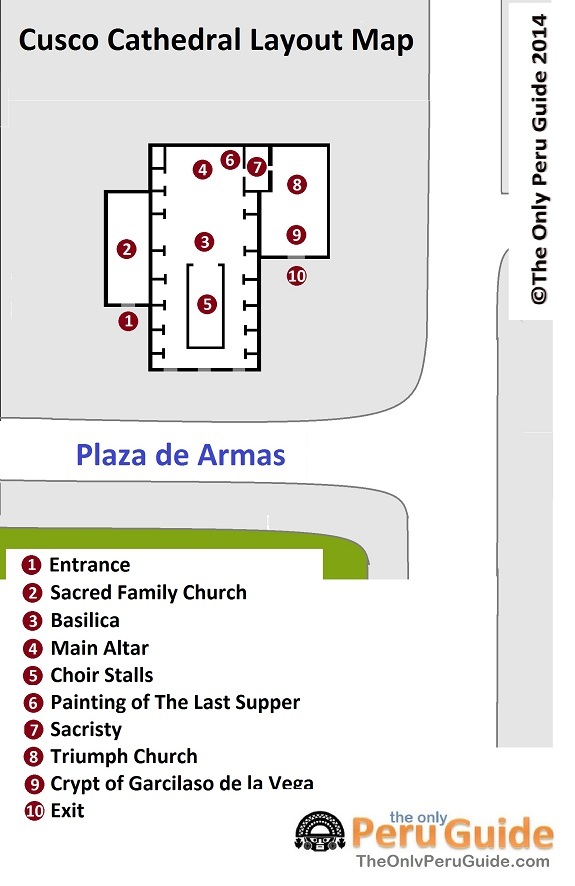 The entrance to the Cathedral is located in the Sacred Family Church, the small church to the left of the cathedral façade.