November to April is considered to be the rainy season in Cusco and May to October is the dry season, though travel during any season is perfectly fine provided you are prepared for the weather. Cusco is busy all year round, but the months of June to October and the festival week surrounding Christmas and New Year are the most popular times to travel. Cusco has many annual festivals and celebrations, plan carefully to include them or avoid them!

The Best Month to Travel

In our humble opinion May is the very best time to visit Cusco. There is a minimal chance of rain, the mountains are lush and green from the passing wet season and tourism levels are generally lower during this month.

The Dry Season (May to October)

Cusco´s dry season is from May to October. The weather during this time is predominantly dry especially during June, July and August. Days are bright and sunny with an average daytime temperature of 16 °C (61 °F). Night time temperatures are much lower during the dry season, with the months of June and July often going as low 0 °C (32 °F). The dry season is widely considered the best time to travel, but it is also one of the busiest times to travel.

The Wet Season (November to April)

Cusco´s wet season is from November to April. During this time Cusco receives a greater amount of rain fall. Statistically the heaviest month of rain is January receiving 160mm (6 ¼ inches) of rain. During the wet season (which is summertime in the southern hemisphere) average daytime temperatures are marginally higher than the dry season at 18 °C (64 °F), but night time temperatures are significantly milder averaging 9 °C (48 °F). Although the wet season is less attractive for tourism in Cusco, the increased rainfall makes the region much more lush and green than compared to the brown/grey dry feel of the dry season. During the wet season it doesn´t rain all day, but typically the rain comes in heavy and hard bursts which can last from 20 minutes to a few hours. Rain usually comes in the afternoon (but don´t quote us on that!).

During the wet season there is an increased chance of landslides in the Cusco region and especially around the region of Machu Picchu. Landslides can often cause delays to train services operating from Ollantaytambo to Machu Picchu Pueblo (Aguas Calientes). These delays can be minor inconveniences to large delays lasting a day or two. From experience landslides are most common during the month of February as the land has gradually become undermined by the constant rainfall of previous months. Although this is a cause for concern (as you obviously want to see Machu Picchu), planning plenty of spare time around your trip to Machu Picchu is essential to avoid any disappoints! 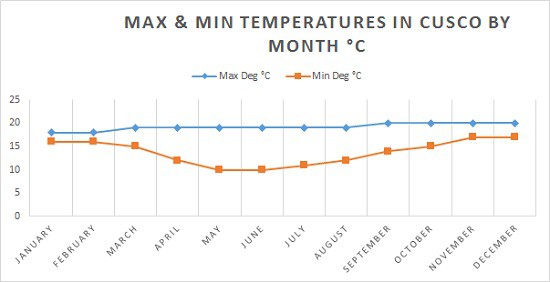 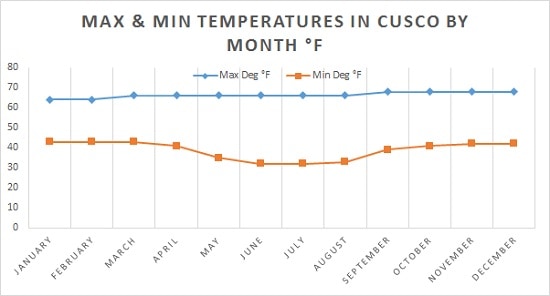 Make sure that you consult our Cusco Festival Calendar (too large to include here) for all the latest information on which festivals take place in Cusco for your planned dates of travel. Take note that during the weeks preceding and following Inti Raymi (June 24), hotel prices in Cusco can double. Over the Christmas and New Year period hotels also increase their tariffs and some even request a mandatory Christmas or New Years’ meal.

TRAVELER’S TIP: If you want an alternative to all traditional tours in Cusco and its nearby attractions, visit Rainbow Mountain Peru before everyone else does. This newly discovered attraction is simply breathtaking and it is a couple of hours away from the city center. Visit  rainbowmountainperu.com to find out more and start planning your trip.